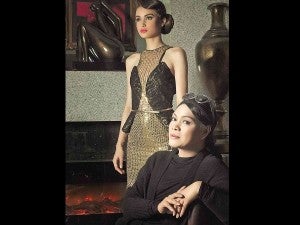 PAT Santos with a model wearing a beaded gown from his upcoming RTW high fashion collection.

Without any fanfare, designer Patrick “Pat” Santos has been one of the top-selling supplier-business partners of SM Department Store.

As the designer for the store’s popular labels-Philosophy for basics and Blanc et Noir, the dressier black and white label, he will be the first designer to launch a high fashion collection under his label, Pat Santos Couture, next year.

Santos is riding on today’s cachet of look expensive for less. He will be creating formals that appear like P50,000, but can be had for only P5,000.

At a press conference in his atelier and workshop in Las Piñas, he announces that SM will be offering his couture line in 2014 which will be available in the high-end stores of SM Aura, SM Makati, SM MOA, Megamall, SM Cebu and SM Lanang Davao.

“The lines are simple, structured, sexy but elegant,” he says.  Sourcing fabrics from China, Hong Kong and Indonesia, he uses silk, chiffon, velvet, jersey and lace.

He adds that SM will also the test the waters with its bridal line.  A beaded wedding dress with tassels and bugle beads and a multitiered skirt will be priced at P40,000.

These off-the-rack gowns can be altered to size at his atelier.

The launch of his formals is a fulfillment of a childhood dream. Santos has always wanted to have more creative freedom.  To earn SM’s trust, he proved himself to be one of the reliable designer-suppliers.

Santos studied fashion design at Madonna School of Fashion and honed his skills in technique and proportion at Golden Hands Fashion and Arts Schools. With help from his sisters, Sharmaine, a co-designer, and Lourdes, the financier, he started producing shirts for various department stores and subsequently uniforms to corporations.

In 1996, SM was looking for more suppliers who could offer clothes that could compete with the influx of cheaper imported clothes. Santos recalls that many of the suppliers of his batch were traders not manufacturers. They sourced clothes from China which had sizes that were too small for the Filipino frame.

“They got the dress cheap but the armhole was too tight for the Filipinas,” he says.

SM’s buyers would question why his clothes cost more than other suppliers, Santos explains that as a manufacturer, he had to cover manpower, materials and packing. His advantage was that he could control the quality and the inventory.

Santos’ first production of basic shirts in soft fabrics for SM was snapped up in two days.  Asked to work exclusively for SM, he took up the challenge of meeting the monthly deadline and quota pressures.

Over time, SM subsequently whittled down its suppliers and made Santos as a business partner. Previously his design directive was to keep the styles unfussy and conservative. Seeing his sales performance, SM gave him more creative freedom.

“I give the peg to the store now unlike before,” he tells SundayBiz. “The merchandisers are younger, mostly foreigners. They are fashionistas who come to work in shorts and heels.”

“I have come to know the Filipina market. I can tell if one design can suit 1,000 people in different sizes,” he says.

Santos says SM is making a bid to be a leader in fashion by providing women with more stylish options. It has been going the way of “fast fashion” companies, which basically channel the up-to-date fashions and accelerate its pocket-friendly versions into its stores.  The SM brands, which Santos handles, observe the SM template that’s similar to Zara’s and Mango’s:  trendy and well made but affordable apparel.

On the fashion cycle, Santos will produce a full collection then deliver six to 10 pieces for each size in each style for the upmarket SM Department Stores and three to six pieces in each style to the provincial branches. Among SM’s suppliers, Santos arguably has the lowest leftover stock, 12 percent per week compared to others which average 45 percent.

Santos says although SM hopes to have no leftover stock and quick turnaround speed, he says it’s not possible. When a style doesn’t sell in one place, it then goes to another province.  Showing a fitted color-blocked dress with a mesh back, he pointed out that the style is too sexy for the conservative provincial market but it would sell in cosmopolitan SM Cebu.

Because SM keeps the stock fresh, it assures that customers will always be purchasing something unique and will have less chances of meeting someone in the same style.

He says 1999 was a turning point when he made it big in ready-to-wear. The Santos family decided to produce their own subcontractors. They encouraged their sewers to form little factories in their areas while the Santoses provided the materials and machines and paid them.

Although Santos has to deliver some 35,000 pieces every month, he says the supply is not enough to meet the demands of the 47 branches of SM Department stores.

Still, SM plans to launch Blanc et Noir as a store-within-a-store concept. Santos will be strengthening Philosophy and give it more focus. He is also tasked to handle other SM brands such as Studio S, Folio and Just Ur Size.

Read Next
Exec’s love for animals turns into a lucrative zoo
EDITORS' PICK
Start the year right with sustainable oral hygiene with SPLAT’s eco-friendly natural toothpastes
Experience Terreno South’s refreshing take on thriving lifestyles
No to ‘negativity’: Marcos Jr. to only do ‘unbiased’ interviews
BBC StoryWorks and TECNO make short film about inclusive mobile camera innovations bringing people together
DOH warns vs improper use of antigen test kits
DOH: More beds needed than oxygen, ventilators
MOST READ
No to ‘negativity’: Marcos Jr. to only do ‘unbiased’ interviews
‘Severe COVID outbreak’ in Baguio, Iloilo City; Metro Manila risk classification downgraded — OCTA
If she weren’t running for President, Robredo says she would vote for Pacquiao
Comelec: No reason to cancel BBM’s COC
Don't miss out on the latest news and information.