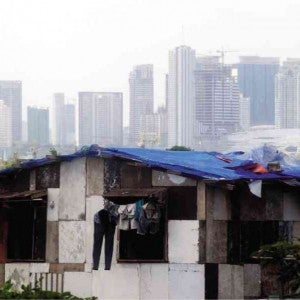 THE INCREASINGLY concentrated poverty in informal urban settlements is one of the consequences of urbanization. File photo by Arnold Almacen

MANILA, Philippines—A network of economists is proposing the creation of “ecosystem zones” where communities can set up livelihood industries to combat poverty and take care of the environment at the same time.

A draft legislative measure on establishing ecozones is being proposed as an alternative to the profit-driven economic models of today.

Speaking on the sidelines of the 5th RIPESS International Meeting on Social Solidarity Economy, Dr. Benjamin Quinones Jr., chair of the Asia Solidarity Economic Council, said the ecozones would be similar to cooperative setups in local communities.

“Under our proposal, human settlements can be set up in denuded areas where they can organize livelihoods and replenish the environment, akin to a cooperative setup,” he said.

For example, areas of Central Luzon may be developed into ecozones for onions, vegetables and rice, he said.

The proposed Social Solidarity Economy Ecosystem Zone Act would convert seven million hectares of timber and forest land into 750 zones where communities, made up mostly of poor folk, could develop specialized industries, say for onions, rice or coco sugar.

Quiñones said that Sen. Alan Peter Cayetano supported the proposed measure in a speech at the RIPESS meeting in Quezon City on Friday.

“He said he would support our bill and would talk to the other lawmakers about it,” Quiñones said.

Quiñones likened the ecozones to a cooperative setup, but on a bigger scale and with full government support.

Aside from boosting food security and keeping the environment clean, the zones would also promote the values of community and bayanihan.

To be dubbed “growth centers,” the ecozones will be organized and managed by the government.