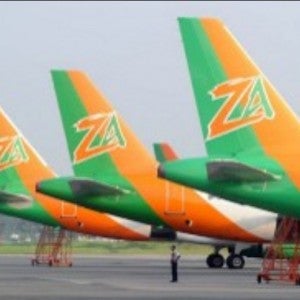 MANILA, Philippines – Zest Air assured aviation authorities on Saturday that all its aircraft were “safe and airworthy” and expressed surprise at its suspension without being given an opportunity “to properly respond to their issues raised”.

The assurance came a day after the Civil Aviation Authority of the Philippines (CAAP) grounded the budget carrier due to a series of safety breaches, including refuelling with passengers on board.

“In response to the order of suspension from CAAP, we are surprised that this was issued without giving us an opportunity to properly respond to their issues raised,” the Zest Air management said in an e-mailed statement.

The CAAP, through Captain John Andrews, its deputy director general, cited a report by its inspectors which showed Zest Air’s continuing violations on air safety standards ranging from the absence of a qualified accountable manager to excessive flight duty time.

In the same statement, however, the management of Zest Air said that it has been “in full cooperation with CAAP in ensuring that the maintenance programs and policies of Zest Air are in place”.

“All findings in CAAP’s letter have already been appropriately addressed and we believe that they do not merit suspension and grounding of our operations,” Zest Air said.

“We wish to highlight and reiterate that all eleven (11) aircraft are safe and airworthy.  We will never risk the safety of our passengers.  The reason why management in the past weeks have decided to voluntarily stop our aircraft from flying is to proactively ensure that any issues discovered, are rectified or properly addressed before we use the aircraft for commercial operations,” it said.

“With due respect to CAAP, our reports on how we addressed the incident in Kalibo reflected this and is confirmed by CAAP inspectors that no maintenance procedural lapses were committed and that the aircraft concerned is not subject to any technical problems,” it said, referring to one of its planes that undershot the runway as it was about to land in Caticlan airport in Aklan in January 2009. A passenger and few airport personnel were injured in the incident that also forced the closure of the airport for more than five hours.

“The incident in Tagbilaran would have been addressed sooner had we not been required to have the maintenance rectification inspected by CAAP personnel.  It is unfortunate that Tagbilaran airport has only one runway and ramp, and this is the reason why the incident snowballed to have affected so many passengers,” it said after its Airbus 320, experiencing technical problems, obstructed the runway.

“In addition, all our mechanics have valid licenses to perform their jobs despite CAAP’s concern where one of our mechanics did not possess the license physically on him but was stored within the work area.  Furthermore, none of our pilots or crew are exceeding their duty time limitations,” it said.

Zest Air said it would be submitting a copy of the comprehensive improvement program currently being implemented “to provide our passengers an improved experience, product and services”.

“We have been investing significantly in our operations and fleet to further raise the standards of excellence across all aspects of personnel, parts, and maintenance/technical services,” it said.

Read Next
Don’t go broke seeking foreclosure help, say housing nonprofits
EDITORS' PICK
Cherry Mobile teams up with Cloud Panda PH, launches online store
DOH: COVID-19 mortality doubling time, transmission rate down
Someone from the Philippines can become $356 Million richer this Tuesday
Leveling up your ‘lutong bahay’ with the kitchen companion you never knew you needed
Congress urged to extend session for approval of COVID-19 response bills
Amid protests, Trump talks of war — and reelection
MOST READ
Binay dares DOTr execs to commute to work during GCQ
51 percent of German firms holding back investments in PH, but not because of COVID-19
Cole Sprouse arrested while joining peaceful protest against racism
Chaos as thousands return to work in Metro Manila
Don't miss out on the latest news and information.