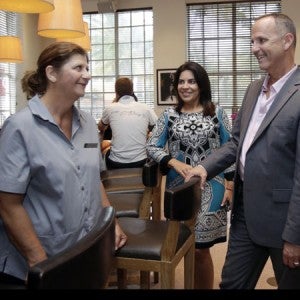 In this photo taken Wednesday, July 17, 2013, Yolanda Oruc, left, talks to general manager Jeff Lehman, right, and HR director Nilmarie Almdovar, center, in the lobby of the Betsy Hotel in the South Beach area of Miami Beach, Fla. Uruguayan native Yolanda Oruc said she could have become an American citizen three years ago but didn’t have the money to pay for attorney’s fees. So when the 52-year-old mini-bar attendant learned that her employer had brought in immigration experts to help her fill out the papers, she jumped at the chance and naturalized earlier this month. AP FILE PHOTO

SANTA ANA, California—For immigrants working toward the American Dream, some employers are now helping them reach their dream of becoming Americans.

Health clinics, hotels and a clothing factory are pairing up with immigrant advocates to offer on-site citizenship assistance as one of the perks of the job in greater Los Angeles, Miami, Washington and California’s Silicon Valley as they aim to make naturalization more convenient for the 8.5 million legal immigrants eligible to become U.S. citizens.

The effort is billed as a win-win for both employee and employers: Workers avoid legal fees and having to shuttle to and from law offices to complete applications; companies create a deeper bond with immigrant workers and there’s little cost as nonprofits pick up the tab.

“You create some sense of loyalty,” said Leonie Timothee, human resources manager at InterContinental Miami, a luxury hotel that has helped six employees apply to naturalize since last year. “It is going to be a part of you for the rest of your life, and to know your place of employment helped you, assisted you in becoming a citizen—I think that’s a great deal.”

In most cases, immigrants can apply to become an American citizen after having a permanent residency green card for five years and passing English and civics tests. But they often take longer to do so because they can’t afford the application fees, fear their English isn’t good enough or simply don’t know enough about the process, studies have shown.

While high-tech companies frequently sponsor foreign workers for visas or green cards, most companies haven’t gotten involved in the naturalization process. Their involvement usually ends at getting work papers unless the employee needs to travel extensively overseas or obtain national security clearance only available to a citizen, said Angelo Paparelli, an immigration attorney who specializes in employment-based issues.

Since last year, 19 companies have signed up to participate in the effort by the Washington-based National Immigration Forum to help more people become citizens. The focus of the so-called Bethlehem Project is on low-wage workers, who often face additional hurdles to naturalization such as long hours and extensive commutes and who may lack the cash to hire an immigration lawyer to help them complete the paperwork.

Uruguayan native Yolanda Oruc said she could have become an American citizen three years ago but didn’t have the money for attorney’s fees. When the 52-year-old who restocks hotel room mini bars learned that her employer had brought in immigration experts to help her fill out the papers for free, she jumped at the chance and naturalized in July.

“I didn’t have a way to become a citizen because I didn’t have the money,” said Oruc, who works at The Betsy Hotel in Miami’s South Beach.

For starters, companies host a free information session run by a nonprofit to let employees know about the process of becoming a citizen. The agencies then hold one-on-one meetings to help fill out the necessary paperwork.

Some employers go further and front the government’s $680 naturalization application fee and deduct the funds from pay checks, said Jennie Murray, manager of the Bethlehem Project.

The effort is funded in part by the New Americans Campaign, which is a broader push to encourage citizenship through workshops, training sessions and the development of a mobile app to help immigrants determine if they’re eligible to become Americans.

Overall, about $500,000 has been donated to jumpstart the project named for Bethlehem Steel, which in 1915 offered its immigrant workers free English-language instruction.

Some businesses are also offering their own citizenship-related perks. Trump International Beach Resort in Sunny Isles, Florida, is paying for English classes to help its employees pass the citizenship test, said Linda Geyer, the hotel’s general manager. The hotel is also offering interest-free loans and letting workers cash out vacation time to cover the cost of citizenship application fees.

Evan Bacalao, senior director of civic engagement at the National Association of Latino Elected and Appointed Officials, said he’d like to expand the program to help naturalize workers in big factories and warehouses in Southern California’s Inland Empire. The region consists of suburbs spread over miles where immigrants often can’t make the half-hour or hour-long trip to an advocate’s office for help.

While unions historically played a role in helping workers naturalize, businesses didn’t often get involved. But companies may be looking for ways to hang onto low-wage workers as immigration to the U.S. has waned and the economy starts improving, said Louis DeSipio, a professor of political science and Chicano/Latino studies at University of California, Irvine.

He said larger companies with a sizable immigrant workforce are more likely to join such an effort.

Beyond breeding loyalty and gratitude, companies such as the Southern California-based health care provider AltaMed see providing such assistance as part of their mission.

For years, AltaMed has focused on treating Latinos and underserved communities in cities such as Santa Ana, where about half of residents are immigrants. As a community service, the network also holds regular voter registration drives in the hopes of churning out more voters who support health care programs for the poor.