A riverine venture in Pangasinan 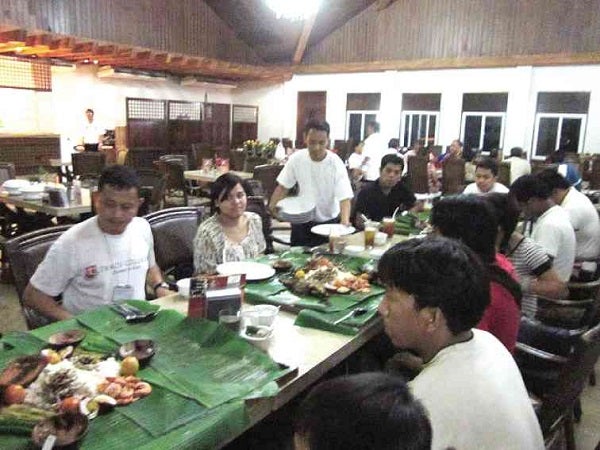 In town recently with a group of media colleagues for Pangasinan Day, one came across a  restaurant with a sense of space and scale: Bangsal is a “lechon (roasted pork) and seafood restaurant.” The style is somewhat reminiscent of a big mountain log cabin.

It is managed by Armi J. Bangsal-Lorica and her mother Carmelita. The restaurant was founded in 1975 by Armi’s late father, Loreto Bangsal.

“It started with one table and one lechon … in one corner of the lot,” Armi says. “Every Sunday we would have roasted pig.”

Soon, she recalls, they started serving lechon every day, “and the table grew from one to twenty.”

Construction on the building started in 1978, and then it slowly grew through the years and decades.

Her father was “conservative,” according to Armi, and he used the earnings from the growing restaurant to expand the building.

Today the property is known as Bangsal Suites & Restaurant, and the complex has a hotel, bakeshop, spa and music lounge.

The suites occupy two stories and have all the amenities. Prices range from P2,500 to P4,500. The property is now owned by Armi’s sister, Marissa Bangsal-Cerezo and her husband, Lorenzo Cerezo, mayor of Binmaley.

The specialties of the house are “a feast for four or more”: Sigay (Pangasinan for harvest) Boodle, P999, ad Chinese Boodle (P1, 299).

“Medyo nagtitipid ang mga tao ngayon (people are somewhat frugal these days),” Armi notes. So, to drum up business, Bangsal has gone into catering, while hosting weddings, debuts and parties.

“So we give affordable prices, combi, eat all you can, from time to time,” she adds.

Also, she promotes the restaurant and its affiliated features in government offices, NGOs, and events and sportsfests like the Palarong Pambansa and the Prisaa meet.

Business, according to her, is “modest, unlike before. People are very selective. We are really selling Pangasinan to tourists, domestic and foreign. Pero kulang pa … papunta na kami (there are not enough tourists … but we are getting there).”

Business for the complex as well as for the province is expected to improve with the Tarlac-Pangasinan-La Union Expressway (TPLEX), which will be ready by next year or 2015.

One heartwarming anecdote about Bangsal Restaurant is that couples who patronized the place in the 1980s now bring their grandchildren to dine there. And they would tell the kids: “You know, your lolo used to court me here, and we got married and had our wedding reception here…”

Isko Moreno: In 1986, it was people, not politicians who united PH