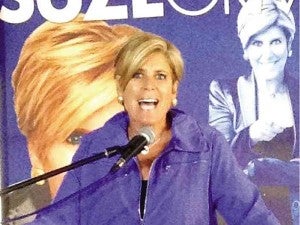 Suze Orman, a two-time Emmy Award-winning television host, bestselling author and one of the World’s 100 Most Powerful Women, according to Forbes Magazine, lives by simple rules: Live below your means but within your needs, and get as much joy out of saving as you do spending.

Follow these rules, says the former waitress who eventually made it big as a financial analyst, and one need not worry about having enough money when the proverbial rainy day comes.

Living below your means will also prevent Filipinos from buckling under the weight of credit card debt, where interest rates reach as much as 36 percent a year.

“That little card allows you to buy things … You don’t have to impress people you don’t even like,” Orman told the Inquirer in an interview in Makati City.

“People have to understand that things will never define who they are. We have to feel proud of what we are and what we have,” adds Orman, who was brought to the Philippines by the Bank of the Philippine Islands as part of its financial wellness advocacy.

That feeling of contentment will help remove the temptation to spend money on things and services that will not really add to the nest egg, which must be big enough to sustain a person or a family long after they retire since people are now living longer than ever.

Within that time, it is imperative that people save as much as they can, she says, and have fun while doing it.

As a first step, she says Filipinos must consider owning their own home, instead of spending money on rent.

Such security will then give Filipinos the courage to put their money in other investment instruments such as mutual funds and even individual stocks.

“Stocks and mutual funds and investment trust funds are better in the long run. They do not require anything to keep, nothing needs to be replaced and there is no capital gains tax,” explains Orman.

She urges Filipinos to put their money in Philippine companies or invest in an index fund as the Philippines is in a position to grow further.

“People really have to stop being afraid of mutual funds and individual stocks. Whenever people tell me that they have five homes but have no money in stocks, I say ‘you fool!’,” says the Social Work graduate of the University of Illinois.

Orman also cautions Filipinos against buying a brand new car if it means getting a bank loan with a term of over three years.

“If you are getting financing for longer than that, then you are buying too expensive of a car. Maybe get a used car instead,” says Orman.

She is also not a fan of investing too much in real estate, unless the investor really knows the market well.

“You have to be very careful with homes as investments because it is illiquid. You can’t pick up the phone and say sell, unlike mutual funds,” said Orman, “And it can happen that prices will fall all of a sudden, and when you need the money, you won’t be able to sell the property.”

She also does not recommend putting money in jewelry.

“It will never be a good investment because it always depreciates, which means you can’t sell it for more than you bought it for. And you can lose it too, and also make you a target,” said Orman.

The key to accumulating wealth, she concluded is not putting money in just one basket but to diversify investments.

“Good diversification means having money in your own home and in mutual funds. Buy into the market every month without fail,” says Orman.

Investments, she points out, are not just for the rich, but for those who are looking for security, especially for their retirement.

“You can not put off preparing for retirement any longer. One is never too young to start investing, but there will come a point when it becomes too late,” says Orman.

It is thus important for more Filipinos to become aware of the importance of saving and preparing for retirement. They also have to know that there are indeed many investment options available in the market just waiting to be tapped.

“If I could just educate everybody to, rather than buy that watch or gadget, put that amount in a mutual fund, then I would be okay,” says Orman.

“I believe that once people have experienced how it is to save money, they will realize that it will give them a better feeling than getting a new watch,” she adds. “Once they get a taste for it, they will keep on eating it.”