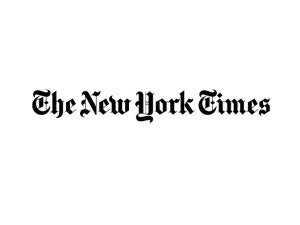 WASHINGTON—The New York Times, boosted by gains in digital readers, rose to the No. 2 spot among US daily newspapers in a sector still struggling with falling print circulation, industry figures showed Tuesday.

The industry group, previously known as the Audit Bureau of Circulations, last year revised its reporting to reflect both print and digital readers.

Digital readership, which includes access on mobile devices and websites, made further gains in the past year and now accounts for 19.3 percent of US daily newspaper circulation, from 14.2 percent in March 2012, AAM said.

The Wall Street Journal remained the No. 1 daily with a total print and digital circulation of 2.38 million, the figures showed. That reflects a drop of some 86,000 in print and a gain of more than 300,000 digital readers.

The New York Times moved ahead of USA Today to the No. 2 position, with a combined circulation of more than 1.8 million. That included the addition of some 325,000 digital readers, lifting the total to over one million. That offset a loss of nearly 50,000 in print from a year ago, according to AAM.

The rest of the industry showed a continuation of the trend in recent years of declining print readership and some gains in digital, which generally produces less revenue.

More than 300 US dailies now have some type of paywall, while many allow some free or “metered” content, according to recent surveys.

The Washington Post, one of the last major US newspapers to offer its content free of charge online, is set to begin its paywall later this year.

AAM said it was studying a proposal to eliminate the five-day average for print circulation to be able to include newspapers that have cut their print editions. Several have reduced home delivery options of print just three days a week.

The New York Times remained the top Sunday newspaper with total average circulation of just over 2.3 million, including more than one million digital readers, according to AAM.

Read Next
Thomson Reuters swings to loss on restructuring
EDITORS' PICK
As campaign heats up, Trump woos Latino, Black voters
Pacquiao camp says McGregor fight being considered
The power of two: Renewable energy and natural gas are the cleaner, better combination
KZ Tandingan taking it one step at a time
SMC applying sustainable measures vs geohazards in Bulacan airport site — Ramong Ang
Water remains our saving grace right now
MOST READ
GCash to begin charging bank transfer fees from Oct. 1
DepEd disowns self-learning module using ‘dirty names’
Has Duterte done any good? Robredo says yes, but he missed out on many things
Even without corruption, Manila Bay rehab is not OK during pandemic – Robredo
Don't miss out on the latest news and information.