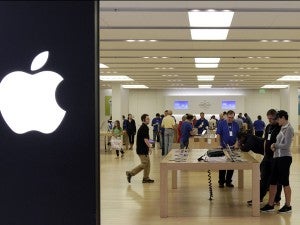 NEW YORK — Apple Inc. sold $17 billion in bonds Tuesday in a record deal spurred by the company’s plan to placate its frustrated shareholders.

The Cupertino, California-based company sold the bonds in its first debt issue since the 1990s to raise money to pass along to shareholders through dividend payments and stock buybacks. The payments are part of an effort to reverse a 37 percent drop in Apple’s stock price during the past seven months amid intensifying concerns about the company’s shrinking profit margins as it faces more competition in a mobile computing market that Apple revolutionized with its iPhone and iPad lines.

Apple has $145 billion in cash, more than enough for the $100 billion cash return program it announced last week. However, most of its money sits in overseas accounts, and the company doesn’t plan to bring it to the U.S. unless the federal corporate tax rate is lowered.

With interest rates so low, it makes sense for Apple to borrow a large sum of money rather than pay a big tax bill.

The downturn in Apple’s stock price obviously hasn’t dampened bond investors’ enthusiasm for one of the world’s most prosperous companies. Demand for a piece of Apple’s offering was so intense that bankers believe they could have sold twice as much debt, according to The Wall Street Journal.

As it is, the $17 billion bond offering is the biggest ever. The previous record for a corporate bond deal was set in 2009 when Swiss drug company Roche Holdings Inc. completed a $16.5 billion issue, according to research firm Dealogic.

With the demand outstripping the supply for the Apple bonds, the investment bankers were able to lower the interest rate to be paid on the debt.

Apple laid out its plans to issue six different types of bonds in a Tuesday regulatory filing. The bonds range in duration from three years to 30 years.

As of late Tuesday night, Apple still hadn’t filed additional documents to break down the final pricing and yields on the bonds.

In a story posted late Tuesday on its website, the Journal said Apple borrowed $5.5 billion for 10 years at 2.415 percent. Other yields included 0.511 percent for three-year bonds and 30-year bonds at 3.883 percent. The Journal said the rates were comparable to what a company with a triple A credit rating could command.

Ratings agencies Standard & Poor’s and Moody’s last week rated Apple at one rung below their highest rating for issuers. Moody’s said only four non-financial companies have the highest rating, and Apple doesn’t deserve it because it could adopt an even more shareholder-friendly policy, and its policy of not repatriating cash could force it to borrow more.

Apple’s stock added $12.66, or nearly 3 percent, to close Tuesday at $442.78. The shares have now risen by 9 percent since Apple announced its plan to return $100 billion to stockholders.