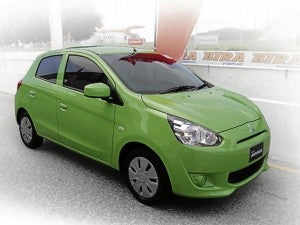 A POP green, a red metallic and a cerulean blue Mirage ready for test drive at Bira, Thailand.

MANILA, Philippines—Mitsubishi Motors Philippines Corp. (MMPC) has ordered the recall of over a thousand units of its new Mirage subcompact car sold in the Philippines due to safety issues.

The recall comes a day after the Mirage, which was staged a comeback late last year, won the prestigious Car of the Year award from the Car Awards Group Inc.

In a statement, MMPC said it had notified the Department of Trade and Industry of its safety recall of the Mitsubishi Mirage GLS models equipped with antilock brake system (ABS) both for manual and automatic transmission variants.

“The purpose of this safety recall is to replace the front wheel speed sensors. These sensors were found to have insufficient waterproofing if penetrated by water from rain and/or during car wash may cause the ABS system not to function correctly,” MMPC said.

The replacement procedure of the deficient part will take about an hour and will be free of charge. Coverage of this safety recall are units sold between November 2012 to March 2013.

“Although there has been no reported accident as a consequence of this problem, MMPC was directed by its principal, Mitsubishi Motors Corp. Japan to voluntarily conduct this safety recall as its proactive commitment to quality and consumer safety,” the company said.

MMPC said it would announce the Vehicle Identification Numbers (VIN) of the 1,420 units of Mirage vehicles affected by the recall. The numbers will be posted on the firm’s website www.mitsubishi-motors.com.ph. Customers may enter their VIN in the website to check if their unit is included in the recall. In addition to this, all affected customers will be notified in writing by registered mail.