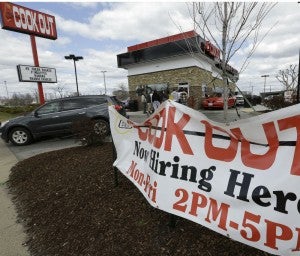 This Friday, March 29, 2013, photo, shows a help wanted sign in front of a restaurant in Richmond, Va. The U.S. economy has enjoyed a four-month stretch of robust job gains, and on Friday, April 5, 2013, the government will signal whether that trend endured into March. U.S. employers added just 88,000 jobs in March, the fewest in nine months and a sharp retreat after a period of strong hiring. The slowdown is a reminder that the job market’s path back to health will be uneven. (AP Photo)

WASHINGTON— A streak of robust job growth came to a halt in March, signaling that U.S. employers may have grown cautious in a fragile economy.

The gain of 88,000 jobs was the smallest in nine months. Even a decline in unemployment to a four-year low of 7.6 percent was nothing to cheer: It fell only because more people stopped looking for work and were no longer counted as unemployed.

Friday’s weak jobs report from the Labor Department caught analysts by surprise and served as a reminder that the economic recovery is still slow, nearly four years after the Great Recession ended.

“This is not a good report through and through,” Dan Greenhaus, chief economic strategist at brokerage firm BTIG, said in a note to clients.

Economists had no single explanation for why hiring weakened so sharply and broadly — from retailers and manufacturers to electronics and building materials companies. Some said deep government spending cuts that began taking effect March 1 might have contributed to the slowdown, along with higher Social Security taxes. Others raised the possibility that last month was just a pause in an improving job market.

Whatever the reasons, slower job growth will extend the Federal Reserve’s policy of keeping borrowing costs at record lows.

March’s job gain was less than half the average of 196,000 jobs in the previous six months, raising the prospect that for the fourth straight spring, the economy and hiring could show strength early in the year, only to weaken later. Some economists say weak hiring may persist into summer before rebounding by fall.

The percentage of working-age Americans with a job or looking for one fell to 63.3 percent in March, the lowest such figure in nearly 34 years.

Stocks plummeted after the report but narrowed their losses later in the day. The Dow Jones industrial average closed down about 41 points. Broader indexes also declined.

The Labor Department uses a survey of mostly large businesses and government agencies to determine how many jobs are added or lost each month. That’s the survey that produced the gain of 88,000 jobs for March.

The government uses a separate survey of households to calculate the unemployment rate. It counted 290,000 fewer people as unemployed — not because they found a job but because they stopped looking for one.

The percentage of working-age adults with a job or looking for one is a figure that economists call the participation rate. It’s the lowest since 1979. Normally during an economic recovery, an expanding economy lures job seekers back into the labor market. But this time, many have stayed on the sidelines, and more have joined them.

Longer-term trends have helped keep the participation rate down. The baby boomers have begun to retire. The share of men 20 and older in the labor force has dropped as manufacturing has shrunk.

After expanding from the early 1950s through the mid-1990s, the share of women working or looking for work has plateaued. Fewer teenagers are working. And some people who have left the job market are getting by on government aid, particularly Social Security’s program for the disabled.

Heidi Shierholz, an economist at the liberal Economic Policy Institute, said the labor force participation among those ages 25 to 54 — “prime age” workers — has dropped to 81.1 percent. It hasn’t been lower since 1984.

“If people aren’t collecting benefits, they have one less reason to be out pounding the pavement looking for a job,” Burtless said.

If the economy slows this spring, it would follow the pattern of recent years.

This year’s steep government spending cuts could have the same effect. But some economists say they expect any weakening this spring to be milder. The economy has a stronger foundation now. Rising home prices and near-record-level stock prices are making consumers feel wealthier and spend more.

“The recovery is on much better footing this year than in the last few springs, and the recovery in the housing market will do much to support growth,” said Sophia Koropeckyj, an economist at Moody’s Analytics.

Economists also cautioned against reading too much into a one-month slowdown in hiring.

Those revised totals suggest that some hiring might have again occurred earlier in the year than usual. Job gains have averaged 168,000 in the past three months, close to the trend of the past two years.

The Fed has said it plans to keep short-term interest rates at record lows at least until unemployment falls to 6.5 percent — and Chairman Ben Bernanke has said a 6.5 percent rate is a threshold, not a “trigger,” for any rate increase. The Fed wants to see sustained improvement in the job market.

Some economists said retailers might have held back on hiring in part because March was colder than normal. That likely meant that Americans bought fewer spring clothes and less garden equipment.

With home sales rising, more people are willing to spend money to spruce up their yards, Whyte said. Commercial developers are spending more on landscaping.

But Whyte said the company has heard complaints from retailers that cold weather in March was holding down sales.

The oil and gas industry has been adding jobs fast over the past several years but cut jobs in March for the first time in 2½ years. Oil drilling and exploration is booming, but low natural gas prices over the last year have made natural gas drilling in some areas unprofitable.

In March, average hourly pay rose a penny, the smallest gain in five months. Average pay is just 1.8 percent higher than a year earlier, trailing the pace of inflation, which rose 2 percent in the past 12 months.

Most analysts think the economy strengthened from January through March, helped by the pickup in hiring, a sustained housing recovery and steady consumer spending. Consumers stepped up purchases in January and February, even after Social Security taxes rose this year.

At the same time, some small businesses say they’ve grown more cautious about hiring. The government spending cuts could cut into sales at companies with federal contracts and at small retailers located near government facilities. And small business owners worry about increased health insurance costs next year, when the government’s health care overhaul is fully implemented.

As federal agencies and contractors cut back in coming months, Nariman Behravesh, chief economist at IHS Global Insight, expects job growth to average 100,000 to 150,000 a month, down from an average 212,000 from December through February. He expects hiring to pick up after mid-year.

“The good news,” Behravesh said, “is that this is happening at a time when the private economy is gaining momentum.”