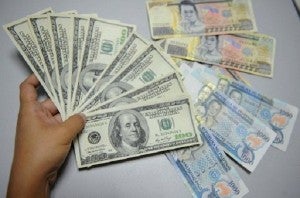 According to the BSP, the latest gross international reserves (GIR) were at a very comfortable level as these were enough to cover for nearly a year of the country’s import requirements. International benchmarks suggest that adequate reserves are those sufficient to cover at least four months’ worth of imports.

The latest GIR also was 6.3 times the country’s foreign currency-denominate debts maturing within a year.

“Inflows from the foreign exchange operations and investment income of the BSP, foreign currency deposits by the national government as well as revaluation gains on the BSP’s gold holdings contributed to the increase in the GIR,” the central bank said in a statement.

Under the central bank’s foreign exchange operations, the BSP buys and sells currencies to prevent excessive volatility in the peso-dollar rate. In case of substantial appreciation pressures on the local currency, the BSP buys dollars to increase demand for the greenback and temper the strengthening of the peso.

Since its close of 41.05:$1 at the last trading day of 2012, the peso has risen by 0.6 percent in the first quarter to 40.80:$1 as of March 27. Market players said the peso could have been stronger were it not for the central bank’s intervention in the foreign-exchange market.

The BSP said it did not have a bias in favor of a strong or weak peso, but it would exercise flexibility to intervene in the foreign-exchange market from time to time to avoid a sharp and sudden rise or fall of the peso. Excessive volatility is bad for businesses and the economy.

Dollar-denominated deposits by the national government also helped boost the GIR. Proceeds from foreign borrowings of the government are normally kept at the BSP and form part of the country’s reserves until these are withdrawn to help pay for the government’s maturing obligations.

The increase in the prices of gold in the world market also drives the value of the GIR because a portion of this is made up of gold holdings, which accounted for $9.9 billion of the total reserves as of the end-March.

When the dollar weakens, there is a tendency for prices of gold to rise as investors shift investments from the greenback to the precious metal.

Given that the country’s GIR exceeded the threshold for adequacy, proposals have been raised for the BSP to invest a portion of the reserves in higher-yielding and more productive investments.

The BSP said it could not invest the reserves in such activities given the restrictions in its charter. The BSP, however, had said that it was willing to sell dollars to the national government for the purpose of creating a sovereign wealth fund.

Read Next
Stocks end lower
EDITORS' PICK
Experience clearer calls nationwide with Smart VoLTE
Cagayan gov endorses 10-day ECQ in Tuguegarao due to COVID-19 surge
Driving can be even more rewarding this New Year — here’s why
New Year, New Rediscoveries
No warrantless arrests despite DND-UP accord termination, says PNP spox
Lorenzana defends decision to terminate UP accord: ‘Times have changed’
MOST READ
Proposed toll for newly opened Skyway 3 ranges from P110 to P274
‘Hotbed of recruitment’: Lacson backs termination of UP-DND accord
Duterte to firms: No franchise until you settle your accounts with gov’t
3 things Leni can learn from Biden’s victory
Don't miss out on the latest news and information.