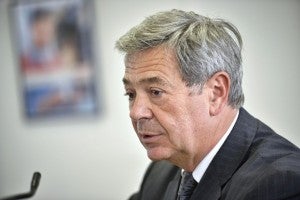 Guy Maugis, CEO of Bosch France, addresses on Friday, March 22, 2013, during a press conference at the Bosch plant Venissieux, to announce that the company plans to discontinue its solar panel manufacturing business. “Bosch is to discontinue its activities in crystalline photovoltaics”, the company announced in a statement, and its “manufacture of ingots, wafers, cells, and modules will be ceased at beginning of 2014”, because overcapacity in the industry has caused prices to nosedive. AFP PHOTO / JEFF PACHOUD

FRANKFURT—German car parts supplier Bosch said Friday it plans to discontinue its solar panel manufacturing business because overcapacity in the industry has caused prices to nosedive.

“Bosch is to discontinue its activities in crystalline photovoltaics,” the company announced in a statement.

“Bosch’s manufacture of ingots, wafers, cells, and modules will be ceased at beginning of 2014,” the statement said.

As far as possible, individual units would be sold quickly and all development and marketing activities were likewise to be ended.

“The module plant in Venissieux, France, is to be sold. Plans to construct a manufacturing facility in Malaysia will be ended,” it said.

Furthemore, Bosch would sell its shares in the Aleo Solar unit.

“Over the past years, Bosch Solar Energy has tried unsuccessfully to achieve a competitive position. Due to global overcapacity, which has since become huge, nearly the entire industry is sustaining heavy losses,” the group noted.

“Despite extensive measures to reduce manufacturing cost over the past year, we were unable to offset the drop in prices, which was as much as 40 percent,” said Bosch board member and supervisory board head of Bosch Solar Energy, Stefan Hartung.

In January, Bosch said the losses of the Solar Energy division amounted to some one billion euros ($1.3 billion) last year.