Joel Cruz: Oozing with the scent of success | Inquirer Business

Joel Cruz: Oozing with the scent of success 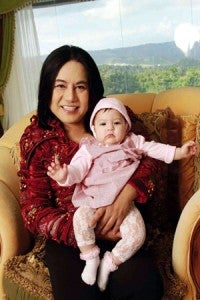 In 2011, fragrance manufacturer Joel Cruz, celebrated the 10th anniversary of his business with an audience of 87,000 at the parking lot of the Mall of Asia.

His endorsers—including Gary Valenciano, Charice, John Lloyd Cruz,  Erich Gonzalez, Pauleen Luna—graced the show.  To top it all, the president and CEO of  Aficionado Germany Perfumes ascended onstage on a hydraulic lift.

Customers, who bought Aficionado worth P250, received  a ticket for general patronage seating. “That’s how we were able to get the audience,” says Cruz.

His multi-million peso business is arguably the biggest in the mass market. The name, Aficionado Germany, plays to the colonial mentality of the Filipino who thinks that anything foreign is superior. Cruz says the fragrance oils, the most expensive ingredient, are imported from Germany because they linger for an average of eight hours.

His brand competes with Prescripto and ZenZest. In the celebrity fragrances category, Aficionado Germany challenges Bench. 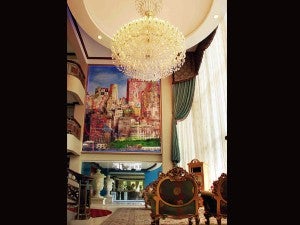 The press has covered his 2,500-sqm mansion with a helipad in Canyon Woods which faces Taal Lake. It is decorated European style with furniture by Italian company Silik, which also caters to royal families.

Cruz spends his weekends with his family and children. On a Saturday afternoon, the nannies with face masks, carry the infants, Prince Sean and Princess Synne sired through invitro fertilization. Since the surrogate mother, a Ukranian, bore twins, he paid P7 million.

The long-haired entrepreneur is a media darling for his ebullience. “I don’t have secrets. I’m the kind of person who tells everything,” says Cruz.

Not quite. Cruz is coy when pressed about the profitability of his business. Aficionado Germany Perfumes has  469 stores, more than half of which are franchises.  The strategy is to sell in kiosks in the corridors of high foot traffic areas in the malls. The brand awareness is created through guerrilla style marketing and billboards.

Although the raw materials are from Germany, production costs are lower as they are produced in a plant in Meycauayan, Bulacan. The packaging comes from China and Korea. Prices range from  P17 for a 30 ml cologne spray to P288 for a celebrity scent.

Cruz reveals the business is experiencing double-digit growth. “The franchise helps us a lot. It’s like having foster parents to take care of your children if you can’t handle them yourself.  They are dedicated to supervise the businesses. All the franchisees are happy. They started with one  store and some now own 22 stores. It shows it’s profitable,”  he explains.

Cruz receives 8 percent from royalties and convinces suppliers to keep a lid on their prices. “We have to make the product affordable. We are helping Filipinos patronize local products, and we promote good grooming. We get the business by volume.”

Some overseas Filipinos have local franchises. “While they are away, we e-mail daily and weekly sales reports.  We always audit. I can tell you that last March 1 you lost a bottle. We have to charge the sales personnel double the price,” says Cruz.

“The franchisees are happy. Even if they don’t visit the stores, we just send their money abroad. It’s as if we manage their businesses. There’s a team of auditors. We have to know their sales because I get 8 percent.”

A good kiosk can sell as much as 100 bottles a day.

“The franchisees trust us. After six months, they can raise money to acquire another franchise outlet again from us. But I advise them to focus on the business. Don’t be too materialistic. If you don’t need a Rolex, Mercedes Benz or BMW, don’t buy yet,” says Cruz.

He adds that he is eyeing uncharted territories in Mindanao such as Sulu and Tawi-Tawi. He is helping a Muslim businessman start up a franchise. “Our products are Halal-accredited,” says Cruz.

Like most entrepreneurs, Cruz attributes his success to following his passions. He cites fashion is his first love. Instead of pursuing medical school, the  psychology major from the University of Sto. Tomas urged his mother, Milagros Santos-Cruz, to  help him start up an atelier in their garage in Sampaloc. In 1987, he started with four high-speed machines and ended up with over 60. He became a subcontractor to Rustan’s, Landmark, Syvel’s and Anson’s for their private labels.

However, the Asian Crisis put a damper on the garments industry. While showing his clothes to a buyer at a department store, he saw racks of garments from China that were going to be re-labelled. Cruz realized that he couldn’t compete with China’s rock-bottom prices.

After folding up his business, Cruz went to California  on an immigrant status, and worked in sales for The Filipino Channel. He ended up hearing complaints from subscribers. Weary of the fend-for-yourself lifestyle, he came home to work as general manager for the truck rental services of his father, Dionisio. Known for being strict, Cruz ran after errant clients who didn’t pay. Consequently, he made the trucking business profitable.

In 1999, Cruz decided to follow his passion for fragrance. He recalls, “When I was in school, I couldn’t leave the house without it. I loved scents like Halston, but I couldn’t afford them.   I would ask my sisters from the States to send me fragrances.” He envisioned      that someday, he would produce world-class fragrances at pocket-friendly prices.

Doing research, he came upon Henkel Philippines which imported fragrance oils from Germany. The fragrance division manager was a neighbor who encouraged him to enter the business. With the help of a French perfumer, Cruz learned to concoct home-made scents.

Cruz then rented a space at the Ever Gotesco Grand Central and sold his products under the brand name of AF, short for Affirmative. After office in his father’s trucking business, he would run to the mall and meet with his two salespersons. At rush hour, passengers from the LRT would shop on impulse.

“My two girls got the payments and put the money in the plastic bag. There were no credit cards,” says Cruz.

A natural marketer, Cruz swayed shoppers to patronize his products. The kiosk was earning  as much as P25,000 a day.

“Location is important. Not all businesses can survive in the malls. When you are near entrances where there is foot traffic, the sales person must be aggressive in introducing the products,” he says.

After two months, he opened another kiosk at Isetann Recto. The hardworking Cruz would have dinner with his sales staff after mall hours to discuss sales and strategies.

A mother of a sales associate scolded her for coming home late at night. Cruz was bothered by the mother’s reprimand and assured his staff that the business would succeed someday. Today, the sales associate is a contented housewife as her husband is a franchise manager.

When Cruz saw the potential of his business, he  expanded into manufacturing and changed the name of his company.

“Initially,  making fragrance was as simple as mixing different ingredients in a coffee. But with our plant,  it’s a long procedure and our ingredients and products must be stored at room temperature to ensure quality.”

From two sales associates, Cruz now has a workforce of some 2,500. The plant produces 72 scents.

On product development, Cruz researches on the latest or most saleable scents and produces comparable fragrances. “We never name our fragrances. They come out in codes. F1 is like CK One. F3 is similar to Tommy Boy. If you have a fragrance from Banana Republic, you can ask for our version of it. Sometimes if you bring your perfume and  compare ours, you can’t tell which is which.”

They are not imitations since Aficionado Germany always tweaks the formulation.