The floating village of Kampong Phluk 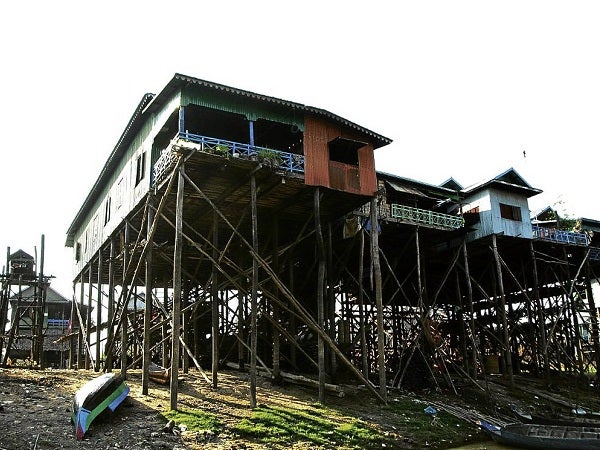 HOUSES tower high above on stilts that stretched as much as three stories into the sky. During the rainy months, the river water goes all the way up and falls a meter or two short of their floors, hence ‘floating villages.’

The Cambodians are a resilient people. After their country fell into the destructive rule of the Khmer Rouge from 1975 to 1979, the people have risen to their feet, picked up the pieces and are beginning to thrive once more.

This resilience is no more visible than in a community I visited along the flood plains of the Tonle Sap Lake in central Cambodia. It is considered to be the largest inland water body in Southeast Asia and is habitat to more than 400 species of fish, crocodile, reptiles and birds, including rare Siamese crocodiles, freshwater turtles and the giant Mekong catfish. The lake feeds Cambodia more than 50 percent of its fish supply. 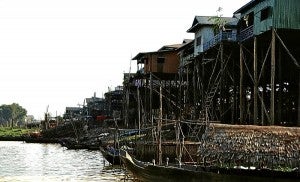 BEING poor fisher folk communities, the homes are at their most basic, and the overall palette is very brown. But many homes lend a bit of joy to the neighborhood with bright color touches on their railings and on other architectural detail.

During the monsoon months, Tonle Sap Lake swells to nearly six times its size in terms of square-meter area due to the reverse flow of the Tonle Sap River, which on dry months, empties out into Vietnam’s Mekong River. The Tonle Sap River, which is located southeast of the lake, is essentially its outlet. But during the monsoon season when rains from the mountains of Vietnam fill the Mekong River Delta, the river back flows and enlarges the lake, swallowing the flood plains but possibly saving many parts of Vietnam from disastrous flooding.

The ebb and flow of Tonle Sap’s shorelines provides Cambodia with a unique and biodiverse ecosystem that gives livelihood to the more than three million people who dwell along its adjoining riverbanks. Because of its expansion, contraction and life-giving resources,  it has been touted as “Cambodia’s heartbeat.” In 1997, the lake was designated a Unesco Biosphere Reserve where nature conservation and human development would be protected and reinforced.

I went through a lakeside community known as Kampong Phluk, a cluster of three “floating” villages that coexist with the lake’s ebb and flow. The trip entailed a 16-kilometer car ride from Siem Reap, with the last few minutes on a bumpy strip of dirt road. The experience is not for one who is not used to roughing it out. Clouds of dust greeted us as we got off our car and made our way to a pump boat that eventually took us on a ride through one of the river arteries that drain out into the Tonle Sap. It is along this river that the homes of Kampong Phluk are built.

It is the dry month of February and the water level is low.  The river is muddy, and along its fringes, the local men cast their nets and manage to immediately catch fish. The sight of boats becomes more frequent as we approached the villages. We could see the land on which houses are built upon, the same land which disappears as it goes under water during the monsoon months. My initial impressions were that of a post-apocalyptic scenario: brown earth, cut logs and branches piled in stacks, smoke and haze diffusing the air, boat hulls turned over. But then of course, we are in the middle of the dry season when the villagers reinforce their homes, repair the boats and prepare for the high waters of the monsoon.

Children played along the riverbanks, and to my awe, homes towered high above on stilts that stretched as much as three stories into the sky. During the rainy months, the river water goes all the way up and falls a meter or two short of their floors. Hence, “floating villages.” Despite their height, many structures were rather large with community centers like school buildings and temples built to this elevation to stay afloat and functional even as the river’s waters would rise.

Being poor fisherfolk communities, the homes are at their most basic, and the overall palette is very brown. But many homes lend a bit of joy to the neighborhood with bright color touches on their railings and on other architectural detail. The same can be seen on some of their boats. Colors matching, like they were bought pre-mixed and used right off the can.  Roofs are the traditional gabled roof with no trace of Khmer influences, except for their newer schoolhouses and monasteries.

Despite their unconventional environment, the village stands as a community, connected by floating staircases and hanging walkways and bridgeways that made moving around afoot possible when the ground was nowhere to be seen. There were even large decks where I imagined the children would play, or families would gather. And of course, there are always the boats that can bring them to the farthest reaches of their neighborhood, course them inland, or take them out to the lake that made the seemingly impossible life here, quite possible.

I consider this visit a must-see in Cambodia, both for its visual value and its lessons on resilience. On my next trip there, I hope to head northeast and paddle out into the bird reserves considered to be the most important breeding ground for waterbirds and migratory birds in Southeast Asia.

The village of Kampong Phluk teaches us that man can coexist with nature and can survive happily, when he works with the ebb and flow of her seasons. While many, myself included, will question the viability of living perched above the tree canopies for half the year, and surrounded by water for the other half, the people of Kampong Phluk will move nowhere else, for the lake and its rivers continue to beat the rhythm of survival into their existence.