Even the young can suffer from heart disease, say experts 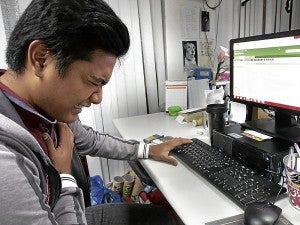 HEART disease can occur even at an early age. A meat-based diet (beef, pork, chicken, egg, dairy), smoking and a sedentary lifestyle can hasten the process. Photo by Tessa R. Salazar

February is heart month. It is also a reminder that heart disease can strike at any age.

Heart disease usually develops silently. Before any palpable damage to the heart occurs, a process called atherosclerosis (or “hardening of the arteries”) would most likely have been taking place in the arteries of the heart for many years, says preventive medicine expert Dr. Neil Nedley, MD, author of “Proof Positive.”

The early phase of atherosclerosis is called a “fatty streak,” according to a study titled “Coronary Heart Disease: Prevention, Complications and Treatment” by W.E Corner and J.D. Bristow.

Early atherosclerosis in an individual can be present as early as age 20, or even much earlier, at the age of 10, Nedley observes. “By the time a person reaches 20, fatty streaks can be so prominent that they are clearly visible when the coronary artery is cut open.”

Nedley asserts that if the unhealthy lifestyle continues, by age 30 the plaques progress to become even more pronounced. By age 40, it wouldn’t be unusual to have significant coronary artery blockages that reduce the diameter of the artery by more than half.

Cause: not old age

The Physicians Committee for Responsible Medicine says that atherosclerosis is not caused by old age. When battlefield casualties were examined during the Korean and Vietnam wars, American soldiers had significant atherosclerosis at only 18 or 20 years of age. Their Asian counterparts, raised on a diet consisting mainly of rice and vegetables, had much healthier arteries.

PCRM says older people are more likely to have heart problems than younger people because they have had more time to indulge in unhealthy habits, not because they have a hereditary tendency toward heart disease. Usually, it stresses, the problem is not due to genetics, but to eating and smoking habits. A doctor can determine if someone is one of only about 5 percent of the population with a true genetic tendency toward heart disease.

“The three most important modifiable heart disease risk factors are cigarette smoking, high blood pressure and high cholesterol,” stresses Nedley. A British Medical Journal study titled “Changes in risk factors explain changes in mortality from ischemic heart disease in Finland” by E. Vartiainen, P. Puska et al., covered 29,000 Finnish men and women over a 20-year period. When these individuals lowered the cholesterol in their diets, lowered their blood pressure and stopped their tobacco use, they reduced their heart attack risk by more than half.