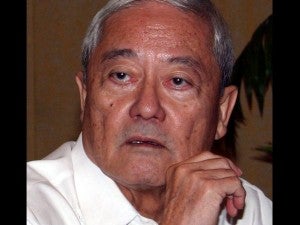 MANILA, Philippines—Businessman Roberto Ongpin has petitioned the Sandiganbayan to recall the hold-departure order it issued against him and allow him to travel abroad to attend business meetings and conduct negotiations.

In a “supplemental motion to recall hold-departure order and for leave to travel abroad,” Ongpin submitted to the antigraft court’s 3rd Division his travel itinerary, including the dates, destination and complete address while abroad.

According to his lawyer, Ongpin is actually in Paris now and was previously scheduled to return to Manila in the first week of February. The hold-departure order was issued only on Feb. 1.

Because of the nature of his business, “an urgent and significant matter has arisen which will require his presence in London, thus his return to Manila as well as his travel itineraries will have to change,” his lawyer said.

The lawyer said his client’s investment banking activities literally spanned more than half the globe.

“Mr. Ongpin respectfully asks this honorable court to give due consideration to the fact that he is requesting authorization to travel not as an ordinary tourist, but for legitimate business,” the motion read.

“Traveling is part and parcel of his livelihood. He needs to travel, and most of the time on short notice, in order to meet key businessmen with whom he is negotiating contracts and deals. In most instances, these businessmen are on similarly busy schedules and meeting with them are only finalized on short notice,” it added.

Ongpin, with 24 former officials of the Development Bank of the Philippines and private individuals, is facing graft charges in connection with the allegedly irregular grant of P660 million in loans to his firm Deltaventures Resources Inc. (DVRI) in 2009.

Ongpin and his coaccused have denied the allegations.