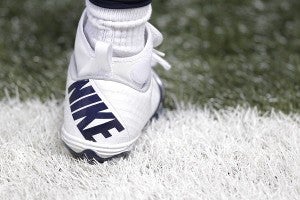 This Dec. 16, 2012 photo shows a Nike shoe worn by a St. Louis Rams football player during the first quarter of an NFL football game between the St. Louis Rams and the Minnesota Vikings in St. Louis. Strong demand in North America helped Nike post second-quarter net income that beat expectations Thursday, Dec. 20, 2012, despite weaker sales in China and costs related to the sale of two brands. (AP Photo/Seth Perlman)

Like most global companies, Nike Inc. has been dealing with Europe’s weak economy and a slowdown in growth in China. Nike reiterated its message from earlier this year that it is working to reduce its inventory in China and reworking its offerings there to adapt to the changing tastes of Chinese consumers.

“We know what needs to be done in China and we know we can do it because we’ve done it before,” said CEO Mark Parker in a conference call with investors on Thursday.

Orders for Nike shoes and apparel to be delivered between December and April rose 6 percent from the same period a year ago, to $9.3 billion. That’s down from a 13 percent increase last year.

Meanwhile, a 14 percent rise in inventory in North America was offset by a 6 percent decline in greater China.

During the latest quarter, Nike completed the sale of its Umbro and Cole Haan brands to focus on its more profitable lines, like the namesake Nike brand.

Net income for the three months ended Nov. 30 fell to $384 million, or $1.14 per share. That compares with $469 million, or $1.03 per share, last year when it had about 3 percent more shares outstanding. Analysts expected $1 per share according to FactSet.

Sales in China were down 11 percent and down 2 percent in Western Europe. But they rose 17 percent in North America, by far Nike’s largest market, helped by demand for basketball shoes and NFL gear. Emerging markets were also a strong point, with revenue up 11 percent.