12 highlights of the automotive industry 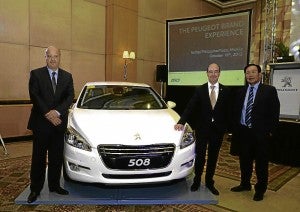 Peugeot press launch at the Sofitel

As the year ends in three weeks’ time, Inquirer Motoring takes a look back at this year’s most interesting highlights and milestones, marked by a number of brands and models reentering the once stagnant automotive market. With stock market indices hitting the roof and higher-than-expected GDP growth figures, here’s looking to an even better 2013 for the automotive market.

Autostrada Motore, the exclusive importer and distributor of Ferrari and Maserati in the Philippines formally launched its showroom, including a certified service center on 32nd and 4th Crescent Park West, Bonifacio Global City, Taguig City. Autostrada Motore chairman and president Wellington Soong was visibly proud as he opened their new showroom and to be included as part of a global network of Ferrari and Maserati dealerships last March 1. This was also the official debut for the Ferrari 458 Italia and the Maserati Granturismo MC Stradale. This was followed by the introduction of the Ferrari FF last May and more recently, the Ferrari California was introduced to the market last November. 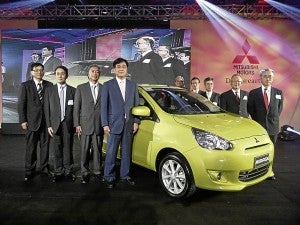 Mirage launch at the PIMS

Barely a couple of months after the launch of the official Ferrari and Maserati showroom at Bonifacio Global City, all eyes went on its neighbor, the Lamborghini Manila showroom. It was officially launched last May 28 and the event was attended by Lamborghini’s CEO and president Stefan Winklemann. The showroom, located beside PGA’s Audi showroom had first adopted a by-invitation policy during its dry run and among its displays was the newly introduced Aventador model, in white color. The car was quickly sold to a private collector even before the showroom was officially opened. PGA Cars is the official distributor for Audi, Porsche, Lamborghini and, more recently, Bentley.

Bonifacio Global City has fast become a boomtown not only for luxury condominiums and office buildings but has also become an important hub for the premium auto market. This was also the site where Asian Carmakers Corp. (ACC), the BMW distributor for the country, chose as a site to launch their most prolific model. With a fully air-conditioned and customized tent structure, ACC spared no expense in a lavish debut party for BMW aficionados and the media for the brand’s best-selling car. It also displayed all the previous generations of the 3-series with the help of the BMW Car Club of the Philippines. Maricar Parco, ACC president, said, “If there is such a thing as a quintessential BMW, it is without doubt the BMW 3 Series. The 3 Series is everything a sports sedan should be, and for years it has stood undisputed at the summit of the premium mid-size segment. Since it made its debut in 1975, more than 12 million customers around the world have taken ownership of a BMW 3 Series. Backed up with its impressive heritage, innovations, aesthetics and driving dynamics, we are confident that the Filipino market will greatly welcome the All-New BMW 3 Series just like its predecessors.” It was a drizzling weekend when final preparations were made for Toyota’s most anticipated vehicle launch—the Toyota FT-86—at the Subic International Airport last June. This 2+2 sports car is said to be the spiritual reincarnation of the venerable and legendary drift car Toyota AE-86 from the famous animé series and movie “Initial-D.”

David M. Feliciano, an international drift-racer, and his team of drift-race drivers were tasked to perform some drift maneuvers during the official launch of the FT-86 last June 18. Feliciano said: “I own a classic AE-86 and I can say the new 86 is just fun, fun, fun. This car definitely has the imprint and DNA of the original AE-86. You’ve seen us do the practice and rehearsal runs, plus the times we were just playing around, we cannot get enough of it.”

After a long wait, America’s favorite pony car has arrived in Philippine shores. Ford Philippines held an official preview at the 2012 Manila International Auto Show last April and started delivering customer cars by September after its official launch last Aug. 25 in a launch-and-drive event at Bonifacio Global City. The event highlighted not only the Mustang’s features, performance, and also its heritage by showcasing some award-winning classic showcar Mustangs owned by private collectors. The wait was well worth it—the new Mustang comes very well equipped in two variants: 3.7-liter V6 Premium at P2.499 million; and the stonking 5-liter V8 GT Premium at P2.899 million. With these price points, Mustangs literally galloped their way out of the Ford showrooms.

Launch of the Genesis Coupe at the Rizal Park

It’s not every day that a carmaker launches its latest model on a full-blown race event. Hyundai Asia Resources Inc., Hyundai’s Philippine distributor, did just that when it launched the 2013 Genesis Coupe at the Round 3 of the Lateral Drift Championship last Sept. 8, in front of race fans at the Quirino Grandstand in Manila. Rather than mount a static display, Hyundai put on a show as the new Coupes swept around the track in true drift fashion under the skilled hands and feet of drivers like Atoy Llave of Atoy Customs. With the introduction of the Genesis Coupe, it has successfully expanded the appeal of the Hyundai brand. Now with a new front design and more powerful engine variants, the Genesis coupe is a world-class sports car platform. The new Veloster model was also introduced. 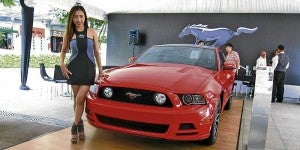 The Ford Mustang makes a long-awaited debut at Alabang.

Last Sept. 12, Mazda signed a distributorship agreement with the Berjaya Group, a Malaysian conglomerate business interests in real estate, education, food, entertainment and gaming as well as automotive distribution. The Berjaya Group took over the Mazda distributorship in Malaysia in 2008. At the helm of the Philippine operations is CEO for Berjaya Automotive Philippines Steven Tan, who is a familiar face in the local automotive industry. The Philippine distribution of Mazda used to be under Ford Group Philippines and the Berjaya Group will assume distribution on Jan. 1, 2013. With the same set of dealership network, Berjaya executives foresee the transition to be seamless and imperceptible to the public.

Eurobrands Distributor Inc. (EDI) becoming the new distributor for Peugeot was formalized in October. After a seven-year absence, EDI officially launched the new Peugeot lineup last Oct. 16, led by EDI president Felix Mabilog, together with Peugeot world press and external relations manager Marc Bocque and Peugeot general director for Asean countries Lionel Faugeres. EDI is part of the Columbian Group of Companies led by businessman Jose Ch. Alvarez. It was also the first press conference held by EDI when Peugeot principals from both the Paris headquarters and Malaysian regional office came to Manila to official re-launch the brand in the local market. The official contract signing between EDI and Peugeot was also witnessed by visiting French Prime Minister Jean-Marc Ayrault, who visited the country in a bid to foster closer bilateral relations. This was the first time a French prime minister visited the country since diplomatic ties were established in 1947.

Last Oct. 23, Inquirer reported that European car giant Volkswagen AG has formally engaged the Ayala group into a new car distribution partnership, seeking to harness an increasing consumer affluence in the country as part of its ambition toward global leadership. Volkswagen announced the appointment of Ayala’s wholly owned subsidiary, Ayala Automotive Holdings Corp., as the Philippine distributor for Volkswagen passenger vehicles. “We are very excited to bring Volkswagen’s technology and engineering expertise to the Philippine market. This partnership is seen to enhance our current portfolio of auto brands given the dominant position of Volkswagen in the global automotive market. This will allow us to offer a much wider range of passenger vehicles in the local market, which will reinforce further Ayala’s strong presence in the local automotive industry,” said Ayala Corp. president and chief operating officer Fernando Zobel de Ayala.

The Mitsubishi Mirage was formally launched last Nov. 16 as president of Mitsubishi Motors Corp., Osamu Masuko, proudly announced that its reservations have reached over the 2,500 mark as of the launch date. In full force during the unveiling of the Mirage were Mitsubishi Motors Corp. officials Yoshizumi Kurata, Masahiko Ueki, Shigeki Dantani and Masuko. Mitsubishi Motors Philippines Corp. executives Orlando Alvarez Jr., Masato Sada, Kazuki Sugino, Taizo Furuhashi and Shibata Masuko joined the local Mitsubishi officers in the formal ceremony at the SMX Convention Center, while a live video feed from just outside the convention center featured a free concert by 10 of the country’s popular rock bands held until midnight at the SM Mall of Asia concert grounds.

Motor Image Pilipinas, the country’s distributor for Subaru vehicles introduced the BRZ, which shares the same platform as the FT-86, albeit in a more premium trim level and a higher price tag of P1.928 million for both the 6-speed manual or 6-speed automatic transmission variants. The higher price tag doesn’t seem to bother Subaru fans as Inquirer Motoring had previously reported that a total of 21 units (all with owners already) had arrived this December and as of launch date, there were a total of 70 reservations for the BRZ for the main Greenhills dealership, with 35 more reservations for both the new Fort Bonifacio Global City and Alabang dealerships combined.

Toyota makes a run for the 11th Triple Crown

Toyota Motor Philippines (TMP) has a lot to smile about these days. It broke another sales record last October of 6,946 units after July’s record breaking 6,258 units. Historically, this is the highest figure ever registered in a single month for any automotive brand. All indications seem to point that Philippines’ leading car brand is poised to win its 11th consecutive Triple Crown. Toyota’s year-to-date sales total 53,115 units, which reflect a growth of 17 percent with a market share of 41.9 percent. TMP president Michinobu Sugata said: “Since TMP started its operations in 1988, it has been our sincere wish to provide Filipinos with the best products and services possible. This record-breaking sales performance is indeed a testament to the trust and loyalty our customers have shown throughout the years. I would like to thank the public, for none of this would be possible without them. Their confidence in our brand inspires us to continuously give our best and move forward to serving them even better.”