business / Motoring
Motoring
On the road

Is there still hope for the auto manufacturing industry? 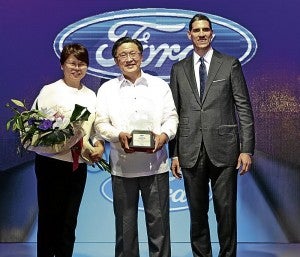 The Philippine automotive manufacturing industry was shaken to its very roots last June when Ford Group Philippines (FGP) suddenly announced the yearend shutdown of its assembly plant. But ironically enough, FGP chair Henry T. Co, who is retiring from FGP effective Dec. 31, 2012, is still hopeful that the auto manufacturing industry will somehow recover and resume its growth.

Co was honored by Ford Philippines (FP) at the Henry Ford Awards dinner last Thursday when his impending retirement was announced by FP president Randy Krieger. It was a rare media appearance for Co, who stopped attending Ford’s media events after he was promoted to chair of FGP in 2009 and devoted his time to helping steer the local auto manufacturing industry. Before Co joined Ford Motor Co. Philippines in 1997 as manufacturing director, he worked for Nissan Motor Philippines for 15 years. He was assigned to Bangkok to serve as business office director for Ford Asean before his appointment as president of FGP in 2002.

Back then, Co recalled, the industry operated in a closed and protected market with CBU (completely built unit) tariffs as high as 100 percent.  Today, zero tariffs for CBUs from Asean countries and for some class of vehicles from Japan. The market volume then, he said, was about 35,000 units, almost all locally made, but this year it will exceed 200,000, all in—of which only about 40 percent will be locally made.

“We had the PCMP and PTMP became CDP, CVDP, now we have this MVDP—and we are running out of good acronyms,” Co quipped. “We went through four major crises, forex crisis of 1985, Gulf War early 1990s, the Asean crisis in 1997 and the latest global financial meltdown. And I am not even counting the countless oil (price) spikes, natural and self-inflicted calamities.”

Forex crisis. Co clearly remembers the Philippine foreign exchange crisis of 1985 when auto manufacturers had to earn their own forex to import CKD (completely knocked down) kits. “We were exporting doors, lumber, software, all kinds of things and even disposable wooden chopsticks.  Could you imagine how many chopsticks we had to export just to import one CKD kit? About 10 million! I think there is no argument that the past 30 years have been really colorful.”

Co pointed out two major initiatives in which he played a key role and which had a huge impact on the auto industry today and in the future.  One was the excise tax reform from specification to value-based. “The dynamic market we have today is largely due to this reform,” he asserted.  “Today, car buyers can choose from a very wide range of very cost-competitive products. The government is able to collect more taxes and the industry is able to operate in a stable regulatory environment.”

Ford’s export program is the other major initiative that Co is proud of.  “Yes, we will not be able to sustain it but we have proven that it can be done. We exported over 80,000 vehicles valued at more than a billion dollars. We helped improve the image of the Philippines.”

Challenge. Co then zeroed in on the challenge of building an auto manufacturing industry by sharing his answers to two difficult questions frequently brought up over the years during his interactions with regulators and friends in the industry. The first question he was often asked, he said, is why we need to support auto manufacturing. “Are you really building cars? I think you are just doing assembly?” Co says he was asked.

Co’s answer to that is simple: “If we do not build houses, no one will make the materials that go into making houses. If no one makes cars, no one will make the parts that go into the cars. It isn’t about building a Filipino car. It’s about building a Filipino capability. It’s about what you learn in the process of trying to build a car. It’s not about getting to the moon, it’s about what you get out of trying to get to the moon.”

CBU influx. The second question, Co said, has to do with the more recent huge influx of imported CBUs from neighboring countries. He is asked whether the local auto manufacturing still has a chance. Co answers this question with his own two questions: “First, with 95 million people—we are globally ranked 13th in terms of population—can we provide enough jobs with our current portfolio of industries? BPO (business process outsourcing), tourism, agriculture, construction, mining and others.” “ If yes,” he continues, “then name me a developed country of similar scale that does not have a strong manufacturing industry.

Co claimed that the Philippines is fortunate to have global brands like Ford as partners in our effort to build an industry. “However,” he emphasized, “we need to realize that the ultimate task and responsibility of an industrial capability can only belong to us Filipinos.”

Two questions. Co’s retirement speech elicited in my mind two questions that I e-mailed to him and that he answered over the weekend. My first question was how come only Ford implemented the Board of Investment’s car export program and why the other manufacturers did not.

Co replied, “I have often asked, ‘Why can’t we export vehicles?’ since the start of my career and this was in my radar screen all these years.  The simple answer is when the planets were close to aligning in early 2000, I was at the Ford Asean Business Office to recognize it. I was also fortunate enough to be in a position to push for it. The conditions were right internally (within Ford’s regional plan) and externally (Asean and Philippine regulatory environment). We managed to put together a business case for it. Why didn’t others do it? Simple answer is, ‘It is not easy, but under the right conditions it can be done.’ I know at least one other carmaker that tried to do it but eventually failed to make it happen.”

My second question was what government initiative or program he would suggest to grow the Philippine auto manufacturing industry. “We have tried many things over the past four decades but have not been as successful as our Asean neighbors,” Co answered. “As we move forward, the free trade environment can only make the task even more challenging.  Over the past few years, a lot of studies have been made by very qualified people and organizations. There is no shortage of ideas on how to go about this. However, as I said in my speech, developing an auto industry requires a very clear vision, focus and lots of political will.  We must really want it. We cannot legislate an auto development program but at the same time make convenient excuses for allowing actions that undermine the program. It can be done, but as a country we have to really want it.”

So, after listening to Henry Co, the logical conclusion is: Yes, there is hope for our auto manufacturing industry to recover and grow—if our government and our people really want it to succeed.