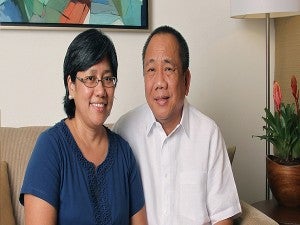 BOY and Gigi Vinzon: Serving with a heart. PHOTO BY NELSON MATAWARAN

TWO YEARS into business, Cocoon Boutique Hotel, the county’s first eco-hotel, has been consistently listed in the top four hotels by Trip Advisor.com, and other Internet travel portals.

A David among the Goliaths, Cocoon has been in the company of international chains such as Makati Shangri-la, Marriott and Peninsula Manila. The eco-friendly accommodation has become companionable with luxury.

The success of Cocoon lies in the hearts and souls of the owners and the 35 staffers. Regina Cielo “Gigi” Vinzon, the hotel’s founder and general manager, is an accountant. Her husband, Rafael, “Boy” to friends, is a lawyer who heads the tax services department of the accounting firm Reyes, Tacandong and Company.

Although the Vinzons owned a successful folk house, My Bro’s Moustache in Quezon City, they were looking for a business that would keep them busy upon their retirement.

Gigi was senior vice-president and group comptroller of CWC Group of Companies. She now serves as a consultant. Meanwhile, Boy’s company has over 320 accounts and still growing. Boy looks after the hotel’s bottom line.

He says Cocoon is his wife’s advocacy. Gigi, whose managerial skills were honed during her years with CWC, made environment a priority.

She felt strongly about reducing the impact on the environment and tried to make the hotel eco-friendly. To that end, she used renewable materials in building the hotel.

The fixtures such as the accent walls and doors were constructed from salvaged hardwood with the worn details of the wood lending charm to the rooms. The double-glazed glass windows ward off the elements. The walls on the roof deck are made of stone remnants from the construction. The roof hatch also prevents the heat island effect. The herbal garden not only provides ingredients for the dishes but also cools the roof deck. The toiletries use gentle and organic ingredients. Its charity is the Bridges Foundation 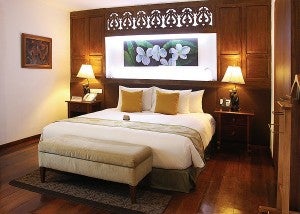 THE ACCENT walls of Cocoon are made from architectural salvages. The bedsheets are made of Egyptian cotton of 400-thread count. The pillows and mattress follow the contour of the body. PHOTO BY NELSON MATAWARAN

More crucial is the use of energy-efficient appliances and lighting fixtures, and the dual-piping system, grey-water recycling that translate to great savings, says Gigi.

Located on Scout Tobias, Cocoon creates a niche in Quezon City where there is a dearth of comfortable hotels that offer five-star facilities aside from a ballroom, business center and a spa.

The tenants include Peps Herrera Salon which is popular among the celebrities, Il Duello Italian restaurant and Paire, a wine and desserts place, a flower shop and aesthetic clinic. Since it is near the TV stations, actors such as Piolo Pascual, Angelica Panganiban and John Lloyd Cruz have been sighted.

The staffers, trained by former hotelier Annie Convocar, provide a hospitality that melts the heart of the guests.

The hotel averages 70 to 80 percent occupancy. It has a mixed clientele from “stay-cationers” or locals spending weekends in the city, foreigners and overseas Filipinos. Forty percent of repeat guests are foreigners and balikbayans.

“Based on the comment cards, guests say they love the service, comfortable beds and the bath experience,” says Gigi. Cocoon takes pride in a customized mattress that cradles the body, goose down pillows and linens that are 400 in thread count which is double the number of the other hotels. Guests can soak in the oversized tub.

For its function rooms, Cocoon also gained a market for weddings, conferences and birthday celebrations.

With the increasing demand for affordable function rooms and hotel rooms, the Vinzons are building a new six-story, 60-room hotel called Hive on the corner of Scout Tuason and Scout Madriñan.

“It will be a busy place that’s why it’s called Hive Hotel and Convention Place. We will offer smaller rooms, two floors dedicated to function rooms and a ballroom with a capacity of 400. Cocoon is quiet and nurturing. Hive will focus on socials and meetings,” says Gigi.

Although the room rates in Hive will be more pocket-friendly,  the level of service will be the same as Cocoon’s.

The idea of building another hotel was born out of non-government organizations and offices in Quezon City who needed meeting places but didn’t have the budget. “There are many businesses in Quezon City but they normally go to Ortigas or Makati. With the new hotel, they don’t have to go far,” says Gigi.

The groundbreaking will be in January and its completion is targeted towards the end of 2014.

Gigi recalls they entered into the hotel business by gut feel. There were no focus groups or research. “The opportunity to build a  hotel presented itself. We were glad to differentiate ourselves from the rest.”