HIV victim dismayed cases up despite own story 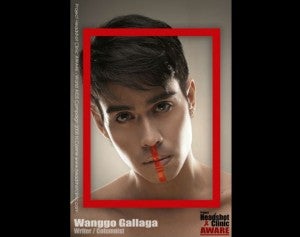 MANILA, Philippines — When 29-year-old Wanggo Gallaga announced in 2008 that he was infected with the human immunodeficiency virus (HIV), he was hoping that the people would learn from his mistake.

Four years after, Gallaga wondered if his confession has made a difference considering the continued increase of HIV cases in the country.

“I was diagnosed back in August 2008 and for the past four years, I’ve been trying to tell my story so that people can learn from my mistake,” he said at a forum on “HIV/AIDS in the Philippines” held at the Senate on Monday.

“The numbers have been increasing so hindi ko alam (I don’t know) if I failed,” said Gallaga, son of Filipino filmmaker Peque Gallaga.

According to the 2012 Global Report of the United Nations Programs on HIV/AIDS (UNAIDS), the Philippines was one of nine countries where new HIV/AIDS cases increased by 25 percent from 2001 to 2011.

The others are Bangladesh, Georgia, Guinea-Bissau, Indonesia, Kazakhstan, Kyrgyzstan, Moldova and Sri Lanka.

Also in 2001, Tayag said, there was only one new case reported every three days compared with the nine new cases being reported in 2012.

“And they are patients for life,” he said.

Unlike in 2001 where HIV cases occurred at age 25 to 44, the new cases are now prevalent among the young generation – between 15 years old and 24 years old.

“There was also a shift in the HIV epidemic,” Tayag said.

“Predominantly from 1984 to 1990, more females get HIV infected in the country. Now, it’s mostly males that are being reported as getting the HIV infections.”

There was also a sudden shift, he said, in the trend at how the virus was being transmitted “from heterosexual unsafe sex to predominantly male to male transmission’’.

The main reason why a male who had sex with another male did not use condom was simply because it was not available, Tayag said, citing a survey.

Former Health Secretary Alberto Romualdez, who was at the audience, stood up and also pointed to the lack of supplies as the reason behind the sudden increase of HIV cases in the country in 2006.

“2006 was when the supply of condoms donated by USAID and other donors ran out…The national government was prevented from purchasing, supplies ran out all the way down the line,” Romualdez said.

“When I was Secretary of Health, I was not exactly supportive of legislation on RH bill because I thought we were doing it already. But I think the experience of running out of supplies made it imperative that there’s a law that mandates the national government to procure RH supplies whenever it necessary such as this instance when I think it’s necessary to achieve the goals set by the international communities with respect to the incidence of lowering the prevalence and incidence of aids,” he added.

Alarmed by the growing number of HIV cases in the country, Senator Pia Cayetano filed a resolution in the Senate to investigate the matter and will file a bill amending RA 8504 or the National AIDS Prevention and Control Act of 1998.

“We need protective laws not only to be enacted, but also adequately enforced in order to achieve our goal of “getting to zero” by 2015,” Cayetano said.

“I want to stress to the honorable members of this Chamber that we have a real chance of ending the global AIDS epidemic. We must face the reality of this generation that did not exist in the generations before us. Let us not close our eyes to the fact that HIV/AIDS is a reality. This is the time to act, and we are in the position to do something in eliminating HIV/AIDS once and for all,” she added.

Cayetano is head of Senate committees on health, and women , and a staunch advocate of the controversial RH bill.

At the forum, the senator cited the growing number of youth getting infected by HIV to further push the passage of the RH bill in Congress.

“That again brings me back to RH bill. Many of my colleagues have taken the position that they are again for sex education…Some say it should start in high school, some say fourth year high school,” she said  during the forum.

“But if  there are already  15 years old who are contracting the HIV infections, then that means they are  only second year high school and without any education. You don’t  give these children a fighting chance,” she said.

Because of this shift in the trend of HIV infections,  Tayag said the target of the DoH’s campaign has now focused on  the  younger people.

The government, he said, has allocated a benefit package of P30,000 per  person annually for those who want to undergo HIV test.

“This is not to encourage people to get HIV infections just because we have this benefit package. But of course, we want to make sure that our prevention campaign becomes successful,”  Tayag said.

For Gallaga, the answer to the HIV problem  was simple: “All you have to do is abstain.”

And if you can’t abstain, then use condoms.

“ We can do all we can in terms of making treatment available, giving awareness programs but at the end of the day, the responsibility rests with them…,”  he said.

“Hopefully, we’ll just learn from my mistake kasi ang tanga tanga ko pero sana hindi kayo at hindi na yung (because I was so stupid but I hope you are not and the) rest of the world,”  Gallaga added.