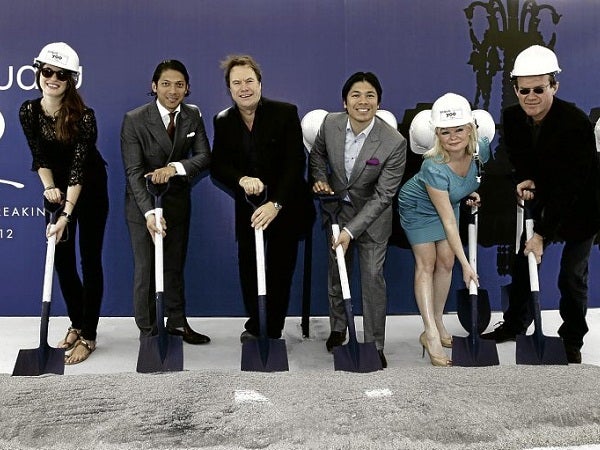 The project is in collaboration with UK-based design and development company yoo, founded by Philippe Starck, the most revered living designer, and John Hitchcock, international property entrepreneur. Considered “Prada of the property industry” by UK-based newspaper The Independent, yoo will interior design the P1.3-billion development, its first residential tower project in the Philippines. 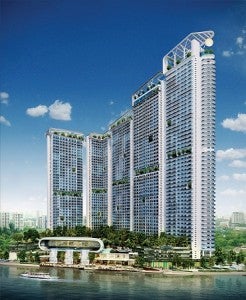 ARTIST’S rendition of the Acqua Private Residences masterplan with the first five buildings. The Acqua Iguazu yoo inspired by Starck tower is the rightmost building designed with the unique crown and multilevel amenity deck called the Cielo.

Three big events highlighted the introduction to the media of the fifth and the tallest tower of the development to rise within Century Properties’ 2.4-project in Mandaluyong City. What a way to celebrate Century Properties’ collaboration with yoo.!

Cognizant of the important role the company’s sales vice presidents play in the successful sales of the four previous Acqua towers, the two Antonio siblings called them for a photo opportunity.

Marco and Robbie took turns in briefing the media about the project. Marco said: “This partnership was forthcoming because Century Properties has consistently worked with the best in real estate. The local market has shown its readiness for branded property, and the international market could not wait to get more of it. They recognize branded developments to be on par with international standards and to be superior in quality. Acqua Iguazu will be such a residence, and one that will offer that rare experience of life as viewed by Mr. Starck and yoo.”

According to Robbie, “This project is consistent with our tradition of creating premium developments, life-enhancing spaces and distinctive experiences you have never before encountered yoo inspired by Starck’s design mark in Acqua Iguazu will forever change our view and standards for residential living.”

Starck’s absence was not missed during the event since his video was played where he expressed how very proud he is in presenting “the first yoo inspired by Starck building in your beautiful country and I am very delighted to be a part of this very exciting project.”

He told those who have experienced their designs before are in for another surprising, inspiring and delightful journey. 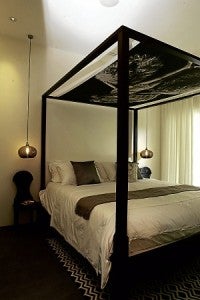 Hitchcock recounted to the media his entry into the international property industry and how he and Starck founded yoo.

For his part, Hitchcock said, “Because these spaces will be a permanent home for a lot of people, we have made our creations unique and very special.”

He was referring to the building’s distinctive crown called the “Cielo.” This multilevel amenity deck will have a gushing waterfall with a swimming pool, a bar, a DJ booth and dance floor, function room, an indoor and outdoor library, a movie room and a dining room.

A cutout of a quote from “The Little Prince” in Starck’s own handwriting will be found in the roof. The Cielo will contain a tribute to the sun and the moon, a spherical design statement.

Officials of the two firms earlier met in Paris to start negotiations for the interior design of the project with Starck ending up to visit the project site.

Antonio said he is confident the project will attract overseas and local buyers especially those who are familiar with Starck’s household name. The French designer is known for his groundbreaking design and innovative spins on everyday products from toothbrushes to lamps, automobiles and even a yacht.

Antonio need not worry about sales since according to Money magazine “yoo design doesn’t improve the living standard, but adds value and boosts sales.”

Acqua Iguazu will rise more than 50 stories high and will only have about 400 units. Its expected completion date is October 2018. Its name was derived from Iguazu Falls, one of the New 7 Wonders of Nature, which is located where Brazil and Argentina converge. The four other Acqua towers—Niagara, Sutherland, Dettifoss and Livingstone—were all named after famous waterfalls all over the world.

Another tower will complete the six residential buildings that will rise in the entire development which features a rainforest-infused design theme.

Capping the fifth tower’s unveiling was the media tour of the showrooms containing the interiors yoo is best known for. These are three model units that differ in inspirations.

• Called Minimal, the one-bedroom unit measures 36 square meters. It is described by yoo designers as clean and calm with a modern edge. Glass, metal and concrete are incorporated in the design that has neutral colors. This design serves as a simple start in determining how you want to live. Your tastes and personality are reflected in the decorative items you gradually add to this design.

• Nature. Pure and simple, this design would appeal to those who love to live with fresh air, blue sky and the smell of rising sun. It would also please city dwellers who want to bring the nature into the urban environment. This model unit has a two-bedroom configuration, measuring 79.4 sq m. According to the designers, its colors and materials have been drawn from natural hues: pale, the sun and sea-bleached wood, sand and pebble gray with soft green.

• Culture. Like Nature, this model unit has a 79.4-sq-m two-bedroom configuration. The balcony area ranges from 11.2 to 13.27 sq m. Philippine culture is mixed with Italian. Quite noticeable in the model unit are a chair with a big eagle on top and a chandelier likened to an upside-down flower bouquet whose lights appear as the flowers.

By partnering with yoo, Centuries Properties is expected to get talked about as well as get written about.