business / Motoring
Motoring
THE LION IS BACK

Peugeot returns to the Philippines under the Alvarez group 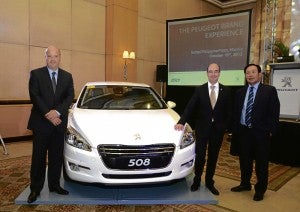 The brand with the lion badge is back: Peugeot, Europe’s second-largest automotive marque, is officially available in the Philippines once again.

The French brand is now under the distributorship of Eurobrands Distributor Inc., a member of the Columbian Group of Companies. The group is an established player in the auto distributorship business, under the helm of its chairman emeritus, Jose Ch. Alvarez. Alvarez is no stranger to high-end European brands, having also BMW under his stable, as well as the increasingly stylish Korean brand Kia.

Eurobrands is positioning Peugeot as a marque with a “distinct kind of luxury.” Felix Mabilog Jr., EDI president and COO, says that the “delectably French [cars]…will be priced way below other European and American-made cars and just slightly higher than Asian-made models.” With that strategy, the company expects to sell an average of 2,500 cars per year for the next three years, on to an ambitious target of 10,000 units per year after five years. This will equate to 5 percent of the forecasted industry sales.

Integral to that strategy are the cars: a mix of stylish yet efficient minivans, sedan, and sporty coupe. The 3008 is a compact crossover that straddles the categories of MPV, SUV, and sporty hatchback. The 5008 is a compact people carrier. In the sedan market, Peugeot will field the front-wheel drive executive-class 508. Finally, as the image leader will be the RCZ sporty coupe. Interestingly, the first three will be powered by turbodiesel engines, while the last will be powered by a 1.6-liter turbo engine.

Peugeot will be capitalizing on its expertise with diesel engines. The French company was the first to introduce a particulate filter, which eliminates harmful particulates from the cars’ emissions. The diesel power plants will come with an auto start-stop system, which shuts down the engine when the car is idling, then instantly starts it up again once the driver taps on the accelerator or flicks the gear lever. The system reportedly cuts fuel consumption by up to 15 percent.

The brand will introduce features like the panoramic roof, which stretches from the windshield all the way to the rear seating area, heads-up display, electronic stability control, hill hold feature, and semi-automatic transmissions.

Peugeot developed a (very small) cult following the last time it was on our shores, circa 2005, with vehicles that the public recognized as innovative and stylishly different. Now with an ambitious new distributor, the brand will surely find its way to many new owners who are willing to try something with a dash of French character and comfort.

Read Next
Driving the Bentley
EDITORS' PICK
JC Cares Foundation extends support to bloodletting program
Fewer Filipinos covered by micro-insurance; sales down 33.2% in end-Sept 2020
2,037 more contract COVID-19 hiking tally of active infections to 31,708
How serious is fatty liver?
3 things you need to know about your laundry detergent
Lorenzana: Reports about soldiers refusing vaccines nothing but ‘rumor’
MOST READ
Palace urged to reverse Duterte proclamation on making Nov. 2, Dec. 24, Dec. 31 ‘special working holidays’
Derek Ramsay reveals he and Ellen Adarna were set up on blind date, believes she’s the one
Senators rib Vico Sotto over love life
Palace thumbs up Solar City
Don't miss out on the latest news and information.

Fewer Filipinos covered by micro-insurance; sales down 33.2% in end-Sept 2020

Lorenzana: Reports about soldiers refusing vaccines nothing but ‘rumor’

Derek Ramsay reveals he and Ellen Adarna were set up on blind date, believes she’s the one