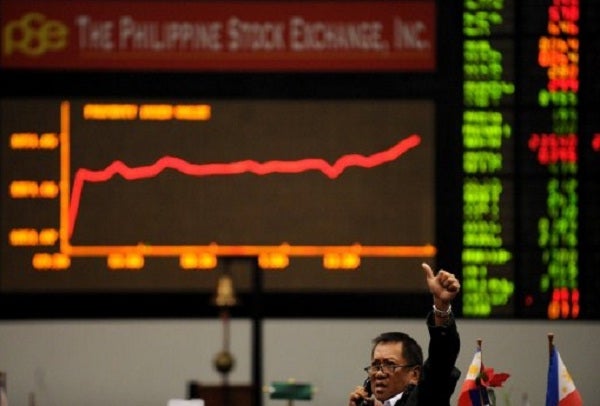 The PSE benchmark in the Philippines has soared 29 percent in the last 12 months, making the country, together with Thailand, as the region’s best-performing stock market in the past year. AFP FILE PHOTO

BANGKOK —The two Asian nations with the region’s best-performing stock markets in the past year are unlikely havens for investors: Thailand and the Philippines. Both are better known for troubled politics and natural disasters, but have outshone higher-octane neighbors as new leaders nurture relative calm.

The PSE benchmark in the Philippines has soared 29 percent in the last 12 months and Thailand’s SET index is up a whopping 33 percent. By contrast, an index compiled by MSCI that tracks stocks in 12 Asian countries is up a ho-hum 2 percent. The Shanghai Composite Index in rising power China has sunk nearly 14 percent.

The Philippines, long regarded as an economic backwater blighted by a succession of deeply corrupt governments, has gained a measure of credibility due to the stability ushered in by the 2010 election of President Benigno Aquino III. Analysts credit him with boosting investor confidence by cracking down on corruption and living up to his promises of openness and good governance.

Thailand too has benefited from an improvement in its politics, although it’s unclear whether the current stability will be enduring. The country seemed to be veering toward civil war in 2010 when deadly street battles raged in Bangkok between the army and loyalists of Thaksin Shinawatra, the populist prime minister ousted in a 2006 coup.

Local stock brokers were resigned to the Thai market lagging its potential but the landslide election victory in 2011 of a pro-Thaksin party and the popularity of the country’s first female prime minister, Thaksin’s younger sister Yingluck, have boosted confidence. Lately, Thai stocks have also got a fillip from big-spending government policies that include efforts to overhaul flood defenses after a widespread inundation wrecked industry last year.

For both countries, the perception abroad that they have become a bit less risky has drawn renewed attention to their selling points.

One of the high notes for the Philippines is its newly minted status as a creditor nation, the first time in 40 years. Its foreign currency reserves total $80 billion, while foreign debt is about $65 billion. Theoretically, the country could pay off all its foreign obligations and still have $15 billion in cash left over, said Alfred Dy, head of Philippines research at CLSA Asia-Pacific Markets.

“It’s the opposite of the countries in the West, where there’s a lot of external debt,” Dy said.

The country’s accumulation of foreign exchange is driven by two sources: remittances, or money sent home to the Philippines by citizens who work abroad, and the dramatic growth in outsourcing.

The remittance trend began as early as the 1960s, when Filipino nurses traveled to the US to work the night shifts at hospitals—hours that American nurses didn’t want to work. Today, more than one in 10 Filipinos out of a population of 95 million lives abroad for work. They sent home $20 billion in 201—more than double the amount in 2004.

The fact that they are spread across the world—in the Middle East, in America, throughout Asia—also spreads the risk if a particular region goes into an economic slump.

Meanwhile, a boom in business outsourcing, enabled by the high level of English proficiency in the Philippines and its young workforce, racked up $14 billion in 2011—soaring from $3 billion that was earned just seven years ago. The Philippines now rivals India as a global outsourcing giant.

These trends have insulated the Philippine economy from the export-reliant doldrums being experienced elsewhere in Asia.

“We don’t rely as much as other countries on exports,” Dy said. “It’s really more of a service economy, it’s sending people abroad and getting contracts on business outsourcing, which makes the Philippines a bit unique.”

“Even if the global economy slows down, we think these two items will be relatively resilient compared to traditional exports,” he said.

In Thailand, the government’s drive to boost investment and growth after massive flooding decimated industry last year has helped to make it a favorite of stock investors.

Thailand’s economy shrank 10.7 percent in the last quarter of 2011 after the country’s worst flooding in more than half a century disrupted operations at more than 1,000 factories, bringing the country’s key automotive and computer parts industries close to a halt.

But ever-resilient Thailand is bouncing back. The Asian Development Bank predicts Southeast Asia’s second-biggest economy will grow 5.2 percent this year and 5 percent in 2013.

“It’s enabled households to have more disposable income and spend more,” said Frederick Gibson, associate economist at Moody’s Analytics. “I think the market has taken that as a positive sign, that households will have the ability to spend and that hopefully will have a positive impact on growth.”

Thailand’s public debt load as a percent of the economy—relatively low at 40 percent—means the government has the leeway to undertake expansionary fiscal policies, such as corporate tax cuts and other measures, said economist Eugene Leow of DBS Bank Ltd. in Singapore.

The country also has mapped out major infrastructure projects, including flood prevention measures, in the next few years.

“There are a lot of projects in the pipeline,” Leow said. “All these projects will cushion any slowdown.”

So of the two stock markets, which might be the better bet for investors wanting to take the plunge into Southeast Asian equities?

Herald van der Linde, head of equity strategy for Asia Pacific at HSBC, said he believes the Philippines stock market has become one of the most expensive in the world.

Van der Linde especially likes Thai banks since demand for financial services is growing fast. Like elsewhere in Asia, Thais have begun to invest in their own local markets and investment products, breaking from the traditional way of stashing wealth into houses and land, van der Linde said.

“Thailand, coming from a low base, is not that expensive yet. So if I had to put my money somewhere, I would put it in Thailand,” he said.