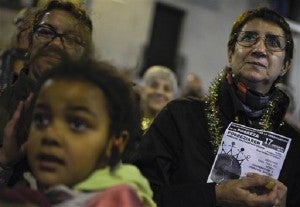 People mark the day against poverty, in Pamplona, northern Spain, Wednesday, October 17, 2012. Spain has won breathing space but nothing more, analysts said Wednesday, after it escaped a feared downgrade of its debt to junk-bond status. AP/ALVARO BARRIENTOS

MADRID—Spain has won breathing space but nothing more, analysts said Wednesday, after it escaped a feared downgrade of its debt to junk-bond status.

Even if Madrid secures a rescue in which the European Central Bank buys its bonds so as to lower borrowing costs, Spain will be left with deep-seated economic problems unresolved, economists said.

Markets rallied after Moody’s Investors Service announced Tuesday it was leaving the Spanish sovereign credit rating at Baa3, just one notch above junk-bond status, with a negative outlook.

The interest rate, or yield, on Spanish 10-year government bonds fell to 5.494 percent on the open market from 5.805 percent late the previous day ahead of the Moody’s decision.

It was the first time the rate fell below 5.5 percent since April.

Stock markets around the world gained ground and the euro jumped to above $1.31 after the Moody’s decision as a feared downgrade to junk-bond status was averted.

Moody’s cited expectations of a sovereign rescue, noting the ECB’s willingness to buy Spanish bonds as well as Madrid’s commitment to fiscal and structural reforms to repair its finances.

“In summary, Moody’s believes that the combination of euro area and ECB support and the Spanish government’s own efforts should allow the government to maintain capital market access at reasonable rates, providing it with the time it needs to stabilize public debt over the next few years.”

Both Moody’s and Standard & Poor’s now rate Spanish long-term debt as being one level above speculative, or junk-bond, status, he noted.

The ECB has said it could buy a stricken eurozone state’s bonds to curb its borrowing costs but only after the state applies for help from the eurozone bailout fund and submits to strict conditions.

Even if the new bailout fund, the European Stability Mechanism, offers no credit, it could buy part of Spain’s new bond issues, and its conditions would give the eurozone a say over the Spanish economy.

But Madrid hopes it can escape arduous new conditions after already implementing spending cuts and tax increases in the midst of a recession and despite a near 25-percent unemployment rate.

“Spain has already taken measures, it should not be a much more demanding conditionality,” said an official at the Spanish economy ministry.

“What we are working on is a consensus with our partners: the day we make the request it must be well received,” the official said.

ECB intervention on the open bond market would keep down Spanish financing costs, Hugh said in an online comment.

But “welcome as the relief is to the government and the banks, the measure does not resolve any of the heavy indebtedness lack of competitiveness issues that so plague the real economy,” the economist warned.

“The slow drip torture will thus continue, and if there are not some substantial measures to restore growth to the economy, or if there is not greater clarification on euro area mutualisation of Spanish private sector debt by the summer then it looks like the move to junk is virtually guaranteed.”

But it advised cautious investors to take advantage of the one-notch cushion that lies between Spain and junk-bond status to reduce their exposure to Spanish government bonds.

With all three major credit rating agencies, including Fitch Rating, holding a negative outlook on Spain, and with Fitch warning that Spain’s budget assumptions are optimistic “the junk-bond threat remains and should materialise in absence of a swift recovery of economic activity,” Commerzbank said.