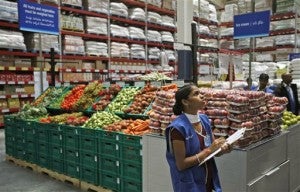 An employee checks the stock inside a newly opened Bharti Wal-Mart store in Hyderabad, India, on Sept. 26, 2012. Global ratings agency Standard & Poor’s warned on Wednesday, Oct. 10, 2012, that India still faced at least a “one-in-three” risk of its credit rating being cut to junk status, despite a blitz of economic reforms. AP PHOTO/MAHESH KUMAR A.

MUMBAI—Global ratings agency Standard & Poor’s warned on Wednesday that India still faced at least a “one-in-three” risk of its credit rating being cut to junk status, despite a blitz of economic reforms.

The Congress-led government of Prime Minister Manmohan Singh in the past few weeks has announced a string of reforms intended to boost foreign investment and spur the sharply flagging economy.

The reiteration of the ratings downgrade threat – initially issued in April – sent India’s stock market down by 162 points to close at 18,631.10.

Standard & Poor’s (S&P) said there was “at least a one-in-three likelihood” of a downgrade of India’s sovereign rating within the next 24 months.

The statement came a day after the International Monetary Fund lowered its forecast for India’s 2012 growth by one percentage point to 4.9 percent, due to stalled investment caused by graft issues, red tape and poor business sentiment.

India’s growth right now is bumping along at 5.5 percent, according to the most recent official quarterly figures – its slowest pace in about three years.

“In our view, there is a significant chance that this trend could eventually affect political, economic, fiscal or external factors to lower the credit rating on India,” the agency said.

“A downgrade is likely if the country’s economic growth prospects dim, its external position deteriorates, its political climate worsens, or fiscal reforms slow,” it added.

S&P earlier this year revised its outlook on India’s BBB-minus rating to negative from stable.

BBB-minus is one notch above a junk investment grade. India’s investment rating is the lowest among the so-called “BRIC” economies – those of Brazil, Russia, India and China.

The note was issued as part of the ratings agency’s Asia-Pacific report card “which doesn’t have any new information on India’s rating,” a spokeswoman for S&P said in an e-mailed message.

“On the other hand, we may revise the outlook back to stable if the government implements initiatives to reduce structural fiscal deficits, improve its investment climate and increase growth prospects,” it said.

In recent weeks, the government has unveiled a string of reforms designed to improve confidence, including allowing foreign supermarket giants such as Walmart to set up shop.

“After a long wait, the government seems to have reignited reform efforts, and that bodes well for the future development of the country,” the ratings agency said.

But with general elections due in 2014 and two state polls looming, it said implementing some of the reforms could be difficult.

The ratings agency estimates India’s fiscal deficit will climb to six percent from the targeted 5.1 percent during this financial year ending March 2013, due to ballooning subsidies.