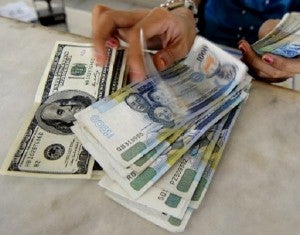 MANILA, Philippines—The peso moved sideways on Wednesday as investors weighed the effects on the global economy of the crisis in the eurozone, the slowdown of China, and stimulus measures implemented by central banks of various major economies.

Volume of trade amounted to $798.6 million from $915 million previously.

The minimal movement of the peso indicated mixed views of investors about how the global economy’s performance over the short term would turn out, traders said.

While reports about moves of central banks in the United States, the eurozone, China and Japan to inject more money into their respective economies fuel hopes of improved global economic performance, traders said the still lackluster employment generation in the United States, problems in implementing austerity measures in Europe, and the slowing growth rates of China and India have been seen dampening growth prospects of emerging markets like the Philippines.