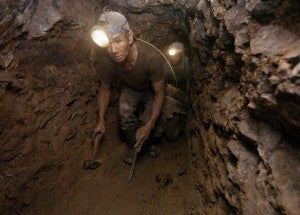 MANILA, Philippines—Philippine miners see no relief from the latest revisions proposed by Malacañang on the implementing guidelines of a much-debated national mining policy and they thus keep the option to challenge the framework in court.

Philex Mining senior vice president Mike Toledo told reporters after a local forum of The Asset magazine that the recently proposed revisions made it appear that the government’s Mining Industry Coordinating Council (MICC) had heeded the call of the industry to revisit the provisions deemed as illegal by the Chamber of Mines of the Philippines. “They came up with these revisions which we feel are still not enough,” he said.

During the forum, Toledo said the proposed revisions to the implementing rules and regulations (IRR) of EO 79 were still full of “constitutional infirmaries” and would still make the operating environment difficult for mining firms.

“It’s still our position that there’s a need to sit down and clear certain things with government. There’s still a lot of uncertainty with regards to revised IRR,” Toledo said, noting that the Chamber met on Tuesday to come up with its list of recommendations on questioned provisions.

“Hopefully we’ll come up with workable solution, otherwise, I can’t see no other recourse of alternative but to question it in court,” said Toledo, a lawyer.

On Monday, it was announced that the MICC had agreed to revise sections 3, 7, and 9 of the IRR of Mining Executive Order No. 79.

On Section 7, the revision states that no new Mineral Agreements shall be entered into until a legislation rationalizing existing revenue sharing schemes and mechanisms shall have taken effect. In the case of expansion of existing contract areas, the same shall be subject to existing laws, provided, further, that the national government-owned mining assets may be subject to the Financial or Technical Assistance Agreement (FTAA).

Under Sec. 9, the framework seeks a competitive bidding for mining rights and mining tenements over areas with known and verified mineral resources and reserves, including those owned by the government and all expired tenements. Mining contractors whose tenements are expiring from Sept. 1, 2012, to April 30, 2013, shall be given 30 calendar days to file renewal applications. Those mining contractors whose tenements expire after April 30, 2013, should file their renewal applications not later than six months prior to the expiry of their mining contracts/agreements.

Toledo explained that the revision did not alleviate concerns on the termination of mining contracts after 25 years versus the provision in the Mining Act that these could be automatically renewed for another 25 years and revised only if mutually agreed upon by the parties. “So the net effect is still (that) the contract has been shortened in clear violation of the Mining Act in clear violation of the Constitution which provides respect for the sanctity of contracts,” Toledo said.

To its credit, Toledo said the mining EO had two redeeming provisions. First, he said this IRR affirmed the primacy of national laws over local laws. This is deemed as useful especially in cases when local government units would implement local regulations that would hamper the industry, such as a ban on open pit mining.

Another good point was the reduction in red tape, Toledo said. As an example, he said, exploration permits could be released within six months.