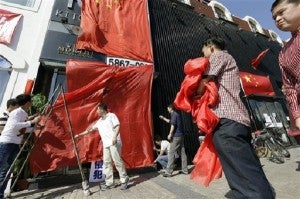 Workers at a Japanese restaurant cover up the shop front with Chinese national flags and red clothes ahead of major protests expected on Tuesday in Beijing, China, Monday, Sept. 17, 2012. Japanese firms including Panasonic suspended operations at plants in China, companies and reports said Monday, after mass anti-Tokyo protests at the weekend over disputed islands in the East China Sea. AP FILE PHOTO

MANILA, Philippines—The Philippines is seeking to lure investment from Japanese companies that are being hurt by their country’s bitter territorial dispute with China, a senior trade official said Wednesday.

Japanese firms in China have been targeted in recent weeks by demonstrators angered by the row over the Japan-held Senkaku Islands in the East China Sea, claimed by China, which calls them Diaoyu, forcing some to shut down.

Trade Undersecretary Cristino Panlilio said Manila was courting 15 of these companies with the best potential for relocating some of their operations from China to the Philippines.

“We don’t want to say we want to take advantage of the misery of others but we’re trying to be practical and help the Japanese,” Panlilio told reporters.

“We have marching orders to our trade attachés to approach these Japanese companies, both in China and Japan.”

He declined to name the companies that were being approached.

To attract the Japanese, Panlilio said the government was offering tax incentives while promoting a well educated population, economic stability and President Benigno Aquino’s efforts to stamp out corruption.

He said that without the diplomatic tensions, rising labor costs in China were already making the Philippines more attractive for Japanese companies.

He said those efforts had paid dividends with companies such as Toshiba, Canon, Toyota and Hitachi increasing their presence in the Philippines.

The Philippines is trying to reverse a trend that has seen its manufacturing sector struggle to remain competitive with China in recent years.

The manufacturing sector made up 17 percent of the Philippines’ total economy in 2011, down from 26 percent in 1980, according to government data.