Philippines predicts $15B from call centers by 2016 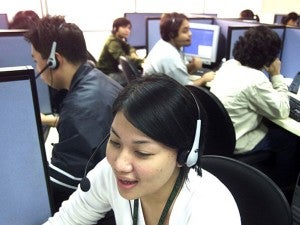 “The reality is we have established ourselves as the pre-eminent brand in call centers,” he told reporters at the sidelines of an industry conference.

The sector passed India in revenue terms in 2009 and in manpower terms in 2010, according to industry figures.

Hernandez said that even the sharp appreciation of the Philippine peso against the Indian rupee in recent months, as well as attractive tax incentives offered by other countries, is not expected to dampen interest.

Philippine call centers were also expanding their market from being predominantly English-speaking to other languages including Spanish, Japanese, German, Mandarin, French, Korean, Bahasa and Thai, he added.

Read Next
Penshoppe gets into Indonesia’s huge market
EDITORS' PICK
Ahead of ONE: Full Blast II, Mongkolpetch warns Elias Mahmoudi: ‘Watch out for my fists’
Trust Robredo’s political instincts – Kaya Natin! convener
Kai Sotto continues to inspire Filipinos by sharing his passions and stories with Smart Prepaid
EDITORIAL: Good news, bad news
Alex Eala wins Grand Slam on Independence Day: ‘I hope I made my contribution to the country’
1Sambayan to nominees: Stick to word of honor
MOST READ
China cautions G7: ‘small’ groups don’t rule the world
1Sambayan to nominees: Stick to word of honor
Duterte, Mayor Sara unlikely to run under same slate in 2022, says Lacson
Leni vs. Sara
Don't miss out on the latest news and information.