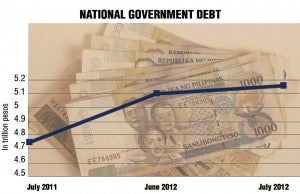 The National government’s debt stock ballooned to P5.16 trillion as of July, up 8.6 percent, or P410.5 billion, from the level in the same month last year.

It was also up by P56 billion, or 1.1 percent, from the June level mainly due to a net issuance of domestic securities as well as a stronger peso.

With the latest population estimated at 96 million, according to the National Statistical Coordination Board, the amount of total outstanding debt represented a share of P53,715 for each citizen.

Documents on the total outstanding debt from the Bureau of the Treasury showed that 60.5 percent, or P3.12 trillion, was borrowed from domestic lenders. The local debt increased by P67.2 billion, or 2.2 percent, from the P3.05 trillion posted in June.

The increase was attributed mainly to the government having issued more local debt paper compared to the volume that was redeemed.

About P2 trillion, or 39.5 percent, of the total outstanding debt was booked in foreign currencies like the US dollar, the euro and the yen.

Aside from loans extended by multilateral lenders and official aid from foreign governments, the Philippines also borrows abroad through the issuance of bonds denominated in foreign currencies.

Foreign borrowings decreased by P11.2 billion, or 0.6 percent, from the P2.05 trillion owed to overseas lenders in June. The decline was due mainly to the appreciation of the peso against the dollar, which removed P19.4 billion from the debt stock.

However, fresh overseas borrowing in July exceeded payments made during the month by P600 million, partially offsetting the decrease. The appreciation of the yen and the euro against the dollar also added P7.6 billion to the outstanding debt.

In July, government debt paper denominated in dollars amounted to an equivalent of P1.05 trillion while yen and euro loans stood at P53.7 billion and P25.7 billion, respectively.