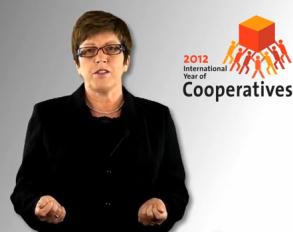 MANILA, Philippines –  Dame Pauline Green, president of the International Co-operative Alliance, said Friday that credit unions have an important role in creating diversity in the corporate business model – the solution to building a sustainable global economy.

“The global economy needs a greater diversity of corporate structures to ensure a better-balanced, responsible and more sustainable economic model going forward,” said Green in her keynote speech to the Association of Asian Confederation of Credit Unions Forum. “Our cooperative model of enterprise is the most pre-eminent of those other corporate structures with a reach into every corner of the world.”

Green spoke before more than 500 credit union leaders at the 2012 Forum of the Association of Asian Confederation of Credit Unions (ACCU) being held at the Crowne Plaza Hotel, and highlighted the role the Asian people are playing in driving growth during difficult financial times in many parts of the globe.

ACCU is composed of 34 member credit union federations from 22 countries, and aims to promote and strengthen credit unions as effective instruments of socio-economic development in Asia.  These federations comprise 22,019 credit unions with about 41 million individual members.

“The Philippines and other Asian economies are the airplane economies – taking off and offering the hope to the struggling world that a way can be found to put the global economy on an sound footing, but I profoundly hope it will be a different footing to that which has prevailed for the last four or five decades and which has recently crashed so spectacularly,” she said.

She highlighted that in developing nations the co-operative movement has had a significant impact on the domestic economy, ensuring the economic viability of rural communities and local finance in particular, but has also increased its significance in other business sectors.

“During the global financial meltdown over the last four years, our co-operative financial institutions, including credit unions, have fared much better than their competitors,” said Dame Pauline. “And I want to congratulate you here in this region on your work during these last few years.”

“Our financial institutions have overwhelmingly come through this crisis stronger. As funds have been withdrawn from our High Street competitors, they have flooded into co-operative facilities.

“Buoyed by the knowledge that our sector most often only lends from its own deposits, and does not engage with the more risky financial ventures – across the world our deposits have risen, sometimes quite substantially, our asset base has grown, and most important for businesses and families, our lending volume has remain steady, and even grown, at the same time as the lending volumes of our High Street competitors has collapsed,” she said.

She called upon Asia’s political leaders to recognise the co-operative model in their economic and strategic planning, saying there was never a more advantageous moment to demonstrate the power of co-operatives and be in a position to lobby global decision makers than now.

“We need to harness the political leadership across Asia to our cause,” she said. “They are certain to be amongst the most powerful political and economic players in the coming decades, and we need them speaking for a more diversified global economy when they are increasingly engaged in economic and political strategy planning.”