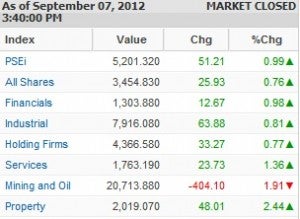 MANILA, Philippines – The local financial markets rallied on Friday as global risk appetite perked up in light of an unlimited bond-buying program mapped out by the European Central Bank to temper borrowing costs of debt-strapped member states and keep the euro-zone intact.

The main-share Philippine Stock Exchange index jumped by 51.21 points or nearly 1 percent to close at 5,201.32. This was the single biggest gain posted by the index in six weeks.

Due to losses earlier in the week, however, the main stock index was only modestly higher week-on-week. Compared to last Friday’s finish of 5,196.19, the PSEi inched up by 5.13 points.

“The announcement of the ECB of an unlimited bond-buying fund to subdue borrowing costs of the troubled euro members and denounced speculation of a euro break up helped boost local equity markets,” said Banco de Oro chief strategist Jonathan Ravelas.

There were twice as many stock prices that gained for every one that declined. All the counters edged higher, especially the interest-rate sensitive property sector, which surged by 2.44 percent. The services counter likewise traded briskly, rising by 1.36 percent.

Only the mining/oil sub-index was in the red owing to lingering concerns over the tailing pond leakage at Philex Mining’s Padcal mine in Benguet. Philex — the only decliner among the most actively traded stocks was Philex — slumped by 8.32 percent on the heels of the government’s probe into its tailing pond leak in Benguet.

In its early morning commentary, Security Bank said the stock market was expected to react positively to  ECB’s move, as this was seen “easing concern that the region’s debt crisis will curb exports from developing nations.”

Across the region, all equity markets posted sharp gains notwithstanding the “ghost month” period when many investors usually stay on the sidelines.

While the biggest catalyst was the ECB meeting, an aggressive investment spending plan unveiled by China also boosted risk-taking in the region. The CSI 300 and Hang Seng indices, the key indices in China and Hong Kong, respectively, jumped by 4.48 percent and 3.09 percent after China’s economic planning agency approved 60 infrastructure projects estimated at $157 billion or over 2 percent of China’s economy.

On the foreign exchange market, BDO’s Ravelas said the peso continued to gain ground against the greenback for the third straight week on speculation that the US Fed would announce a stimulus package at its next meeting scheduled next week. “Continue to expect the currency to range between the 41.70 – 42:$1 levels in the week ahead,” he said.

“Decisive implementation of the new intervention program will help repair monetary transmission, and support countries’ efforts to secure finance at a reasonable cost while they undertake sustained macroeconomic adjustment. We see the ECB’s action as an important step toward strengthening stability and growth in the euro area,” Lagarde said in a statement.

Read Next
Lufthansa flight attendants launch 24-hour strike
EDITORS' PICK
ICC is everything but a court of ‘white people’
Manila is 78th most expensive city in the world for foreign workers
Garcia softens stance, meets IATF halfway on swab-upon-arrival policy
Want to help local farmers? Shop small and eat Real Food
Piolo Pascual: The Ultimate Heartthrob continues to level up
TeaM Energy pushes development programs to help in pandemic rebound
MOST READ
Sharon Cuneta on living in the US: ‘Nagagawa ko lahat ng normal na bagay’
ICC is everything but a court of ‘white people’
Duterte-Duterte tandem possible but ‘winnability is another question’ — Binay
More than 150,000 voters wiped off the registration list – Comelec
Don't miss out on the latest news and information.