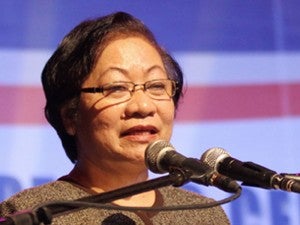 MANILA, Philippines—Labor and Employment Secretary Rosalinda Dimapilis-Baldoz said the Employees’ Compensation Program (ECP), through its administering agencies, the Social Security System (SSS) for the private sector and the Government Service Insurance System (GSIS) for the public sector, has awarded a total of 1.145 billion in benefits payments covering 282,046 claims  filed by workers in CY 2011.

“The State Insurance Fund (SIF), which is managed separately by the SSS and the GSIS,  holds the contributions paid by the private sector employers and the government agencies, finances the ECP’s benefit payments  comprising of sickness, medical services, disability, rehabilitation services, funeral and death benefits,” Baldoz said in the statement sent to “Isyu ng Bayan” of Radyo Inquirer 990 AM.

Baldoz added the benefits under the employees’ compensation program seek to mitigate income risks associated with work-related sickness or injury which resulted to disability or death.

Secretary Baldoz said that the labor department is aware that despite the billions of benefits granted to the public and private sector workers under the Employees’ Compensation Program there are still a lot of workers and employers who have no knowledge on the benefits and privileges they can avail under the program that is why she directed ECC Executive Director Stella Zipagan-Banawis to intensify awareness on the ECP nationwide.

Director Banawis reported that the total contributions remitted by the private sector employers to the SSS in CY 2011 amounted to P1.37 billion while the government remitted a total of P1.97 billion to the GSIS-managed SIF.

Stock up on oxygen amid Delta variant risk – WHO