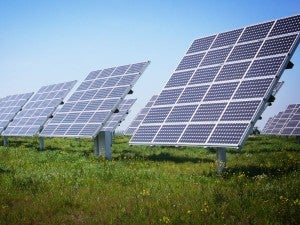 A 313-kWp installation by Enfinity Vallediaccio, Puglia, Italy. Enfinity Philippines Renewable Resources Inc., the local arm of Belgian renewable energy developer Enfinity, has committed to push through with its planned solar power portfolio in the Philippines despite the low feed-in-tariff rate granted for solar power generation. PHOTO FROM ENFINITYCORP.COM

Enfinity Philippines Renewable Resources Inc., the local arm of Belgian renewable energy developer Enfinity, has committed to push through with its planned solar power portfolio in the Philippines despite the low feed-in-tariff rate granted for solar power generation.

In an e-mail, Enfinity Philippines president Dennis Ibarra said the parent firm has promised to run half of its worldwide business here in Philippines, including supply and investments, despite recent developments in the regulatory area.

Ibarra admitted that it would be difficult even for a large solar firm like Enfinity—globally the No. 5 solar developer with a 500-million euro revenue and projects with a combined capacity of 500 megawatts for 2012—to roll out its planned 500-MW solar power portfolio in the Philippines over the next three to five years.

A third of this portfolio will be affected by the feed-in-tariff rate for solar of P9.68 a kilowatt-hour, which was a far cry from the initial figure of P17.95 sought by proponents. According to other solar developers, it would be hard to put up their solar power projects with the lower-than-expected FIT rate for solar and the lack of economies of scale.

Meanwhile, two thirds of the company’s projects are expected to be carried out within the areas where the state-run National Power Corp.’s Small Power Utilities Group (SPUG) operates. These areas, usually in the far-flung, remote parts of the country, are those not connected to any of the main grids.

Ibarra, however, said that while Enfinity expected delays in implementation, the company was finding ways to push through with the solar power projects.

“We will meet with the new board shortly. Enfinity is committed to the Philippines and was notified of another 11 sites awarded to us last week with focus on Mindanao and SPUG. Enfinity will carefully redesign our facilities to match EPC [engineering, procurement and construction] costs and time supply buys,” Ibarra explained.

“We also need investment grade for the Philippines so the total cost can be lowered,” Ibarra disclosed.