US stocks rise in early trading ahead of Fed meeting, jobs data 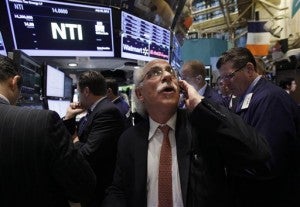 Trader Peter Tuchman works on the floor of the New York Stock Exchange during the IPO of Northern Tier Energy on July 26, 2012. US stocks rose in early trading Monday, July 30, 2012, as Wall Street hoped for US Federal Reserve and European Central Bank stimulus action this week and awaited another report on the US jobs market. AP PHOTO/RICHARD DREW

NEW YORK—US stocks rose Monday as Wall Street hoped for US Federal Reserve and European Central Bank stimulus action this week and awaited another report on the US jobs market.

After two big euro-driven rallies late last week, the major indices opened mixed but within a few minutes all climbed into positive territory.

“The market focus is on squarely on the Fed’s policy meeting on Wednesday and a European Central Bank meeting on Thursday,” said Dick Green at Briefing.com.

The Fed’s Federal Open Market Committee opens a two-day meeting Tuesday. The government’s first estimate of economic output in the second quarter, released last Friday, showed growth slowed to 1.5 percent from 2.0 percent in the first quarter, fueling speculation that the FOMC could act to juice momentum.

Investors also were looking ahead to the government’s July jobs report on Friday, expected to show unemployment remained stuck at 8.2 percent from June and weak job growth.

There were no major US economic releases on the calendar.

Dow member AT&T edged up 0.7 percent after announcing late Friday it would repurchase up to 300 additional shares, representing about 5.0 percent of its outstanding shares outstanding. In December 2010 the telecom authorized a 300-million share repurchase.

Boeing slipped 0.2 percent after reporting an “engine issue” hit a test flight of the 787 Dreamliner in South Carolina on Saturday.

US stocks closed out last week with two days of rallies that left the Dow above 13,000 for the first time since May as weak economic data on both sides of the Atlantic fueled market hopes for additional US and European central bank support.

On Friday, the Dow Jones Industrial Average closed up 1.5 percent, the S&P added 1.1 percent and the Nasdaq leaped 2.2 percent.