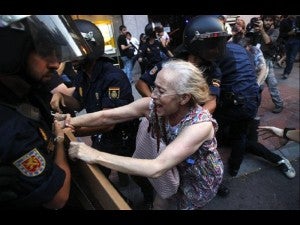 A demonstrator is detained by police officers during a protest against the recent austerity measures announced by the Spanish government, in front of the Popular Party in Madrid, Spain, Friday July 13, 2012. The economic crisis has brought low the middle class, which emerged in the 1980s after decades of dictatorship and flourished during the construction boom of the 1990s. AP PHOTO/ANDRES KUDACKI

FUENLABRADA, Spain—Before the Spanish economic crisis hit, Mercedes Gonzalez and her family lived comfortably, she working in a shoe shop and her husband and second son in construction.

But one by one, over five years each of them lost their jobs.

Now, like millions of other middle-class casualties of the recession, the family of five scrapes by on welfare benefits, cash-in-hand cleaning work and the diminished salary of their eldest son, Juan Pedro.

“We didn’t earn a huge amount but we weren’t badly off. We had a normal standard of life,” says Mercedes, 52, in the sitting room crammed with photos and trinkets in their apartment in Fuenlabrada, south of Madrid.

As the collapse of Spain’s speculation-driven building boom started to ripple through the economy, the shoe shop where Mercedes worked shut down in 2007, leaving her suddenly jobless.

“At first I said never mind, my family was still working. I wasn’t too worried,” she said – until a year later her husband Juan Jose, 55, and second son David, 29, lost their jobs, like millions of others in the building trade.

“They came home one night and it was over, they were left with nothing, no pay,” she said.

The two parents’ monthly income dropped at that time from some 2,500 euros to 850 euros – the sum of their current unemployment benefits.

Household bills such as gas and electricity total 500 euros a month and Mercedes feels anxious every time she opens one.

“We used to be able to do certain things like going out for dinner once in a while, sometimes a holiday. Nothing over the top. Suddenly it all ended,” she says.

“You have to use less light, less gas. You start cutting out things that you don’t really need so that you can eat. Leisure activities are totally finished.”

The crisis has brought low the middle class, which emerged in the 1980s after decades of dictatorship and flourished during the construction boom of the 1990s.

Official figures show there are 1.7 million households in which no member is employed. The unemployment rate is at nearly 25 percent overall and more than 50 percent among the under-25s.

These included cuts to benefits for the newly unemployed and a rise in value-added sales tax that economists warned would hurt low-income consumers in the short term.

She makes 600 euros a month from cleaning work to bolster the income for the home she and Juan Jose share with their three sons.

Juan Pedro, 32, contributes from his pay, which has has been cut by more than a quarter in four years to 900 euros a month. This enables him to help his parents but not to move out on his own.

Their youngest son, Daniel, 18, is looking for work having recently finished training as a computer technician and is learning to drive, the lessons paid for by the family.

Meanwhile, Mercedes’ parents give her and her family food and offer them money.

“Family solidarity is what helps us survive. They have always been there for us. Always,” she says.

“But my sons’ future looks very dark to me. My parents and parents-in-law over the years were able to save a bit of money. We can’t. If something happens to us, I’m scared I won’t be able to help them.”

Juan Pedro arrives home at 7 p.m. from his day’s work as a draughtsman, after his daily hour-and-a-half commute by train, bus and foot. He sinks wearily into the sofa.

“Ten years ago I imagined myself at the age I am now, married with children, with my own apartment, a steady job, independent,” he says.

“Now I’m seeing my brothers who have their whole lives ahead of them and have nothing. Nothing.”