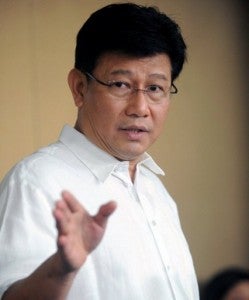 Philippine Environment Secretary Ramon Paje gestures while explaining the government's new policy governing the mining industry at the Malacañang Palace in Manila on Monday, July 9, 2012. Paje said he was confident that Congress would respond positively to a bill being proposed by the Aquino government for a just revenue sharing scheme in mining agreements. AFP PHOTO/JAY DIRECTO

MANILA, Philippines—Environment Secretary Ramon Paje said on Monday that Congress would surely respond positively to a bill being proposed by the Aquino government for a just revenue sharing scheme in mining agreements because government has sufficiently conveyed the need for it.

Paje made the statement when asked whether he was concerned that the government’s intent to raise its share from mining earnings would be hijacked in the legislature under pressure from an expected mining lobby.

“We leave it to the wisdom of Congress, but we are already somehow reporting to Congress that the share of government now is very low, and we believe that Congress is sympathetic to us,” Paje said on Monday.

He also believed Congress would not allow the government’s interest to be waylaid.

A draft proposal of a revenue sharing scheme is being prepared for Congress, according to Paje.

Meanwhile, Paje said the Department of Interior and Local Government would be in charge of implementing the provision of the executive order that stated that local ordinances must be in harmony with the national policy.

Under the new policy, local ordinances have to be consistent with the Constitution and national laws. Local government units must confine themselves to imposing “reasonable limitations” on mining activities.

“What we’re saying is if it’s not consistent, it has to be invalidated. But until such time that particular ordinance is invalidated by competent authorities, we consider it valid and existing,” he said.

He said that under the executive order, the DILG would be in charge of policing its ranks and pointing out inconsistent ordinances, but it must follow a certain process.

Paje called the mining policy an issue of accountability and pointed out that local governments, for instance, could not issue ordinances allowing divorce or abortion, which have not been legalized through national legislation.