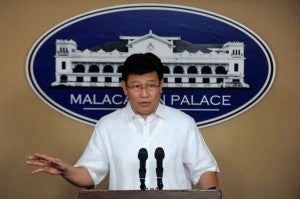 Philippine Environment Secretary Ramon Paje gestures while explaining the government's new policy governing the mining industry at the Malacañang Palace in Manila on Monday, July 9, 2012. The government said it would not approve new mining permits until Congress passed a bill increasing royalties on the industry as part of the new rules. AFP PHOTO/Jay DIRECTO

Section 13 of the order, which establishes “a one-stop shop for all mining applications and procedures,” states that “no Mineral Production Sharing Agreement (MPSA), Financial and Technical Assistance Agreement (FTAA), Joint Venture Agreement (JVA), or Co-Production Agreement (CPA) shall be approved without the FPIC (free, prior and informed consent) of the concerned IPs and compliance with the social acceptability requirement of the communities affected.”

Baguilat said he was “glad” that Malacañang issued an official recognition of the FPIC as a requirement for pursuing mining. “But let’s put more safeguards on the one-stop shop, which could be turned into an instant processing machine if local stakeholders were not vigilant,” he said.

Baguilat had campaigned for rationalized guidelines in enforcing government’s FPIC certificates, which all developers, including the mining sector, have been required to obtain from indigenous Filipino communities before they can operate in ancestral domain areas.

But in Baguio City, advocates for indigenous peoples rights expressed dissatisfaction with EO 79.

Beverly Longid, president of the party-list group Katribu, said the directive offered “no considerations for IP rights,” when the President’s order asserted national laws over local measures that banned open pit mines or which defined their territory’s environmental code.

Longid said aside from specific provisions benefiting IPs, many of these local laws shielded IP communities from the impact of large-scale mining.

Baguilat said no executive order could make up for what he described as the “flawed Mining Act of 1995,” so lawmakers “are still asking Malacañang to endorse the proposed Philippine Mineral Resources Act of 2012 (House Bill 5473), which would rectify the flaws of the 1995 law.”

“In essence, we want fair revenue sharing, guaranteed environmental protection and that the rights of indigenous peoples are always upheld,” Aguilar said.

In Pampanga, Gov. Lilia Pineda said she has not signed a petition by governors to challenge EO 79.

While she has not read the executive order, Pineda said the Pampanga government has always followed and would always follow national mining laws in regulating the quarry industry from which the province drew P510 million in fees and taxes as of June.  Vincent Cabreza, Inquirer Northern Luzon, and Anselmo Roque and Tonette Orejas, Inquirer Central Luzon