Why the Montero is useful in flood-prone roads 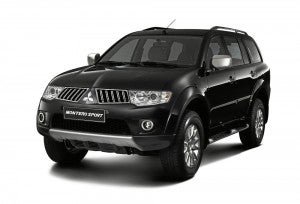 THE MONTERO Sport will remain to be the best-priced and best-specified SUV in this market for years to come.

Mitsubishi has been able to overcome its past crises by focusing on what’s important in the motoring industry: to come up with a product that is practical, desirable, relevant and, if not affordable, then at least offers good value for money. The Mitsubishi Montero Sport embodies all of these values, achieving something of a Holy Grail in the motoring industry, starting in 2009.

In all, there are seven variants available, with 4×4 and 4×2 drivetrains, manuals and automatics (with paddle shifters on the top-model GTV variant), and with only one engine powering six variants, the new for the 21st-century 4D56 diesel engine, equipped with common-rail direct injection technology and variable geometry turbine technology for added assurance, providing a power output of 178 ps and 350 Newton-meters of torque. A new for 2012, 3.0 gasoline engine model in 4×2 a/t trim was also silently launched, but Mitsubishi Motors Philippines claims that with limited availability of units, they aren’t pushing this variant aggressively yet. With its huge price spread—from a low of P1.180 million to a high of just over P1.7 million—the Montero Sport encompasses a very broad spectrum of car buyers in the market.

At just under P1.180 million, the Montero Sport is able to entice buyers previously looking at an AUV/MPV into a proper SUV, a factor that has allowed it to be the second-best-selling vehicle of 2010, and the third-best-selling private passenger vehicle in 2011, an MPV from another Japanese car company sneaking past it by a mere 7 units. Considering that the aforementioned MPV is sold to fleet accounts as a commercial vehicle for hire, whereas the Montero Sport is personal purchase, or a high-end executive car plan, it’s a testament to how well thought out the Montero Sport is, from a marketing and engineering/design-specification point of view.

Going in its fourth year, the Montero Sport has been receiving small but useful updates. The biggest change came last year with the introduction of the VGT-equipped engines and the 5-speed automatic plus a multi-media system featuring GPS Navigation. In other years, the changes were minor such as color changes. For 2012, the Montero Sport receives another useful upgrade. Previously, the second set of air-conditioning vents were all the way on the third row, and to one side. The 2012 Montero Sport has the second set of a/c vents positioned above the B-pillars and pointing directly toward the second-row passengers. It makes sense, since the third-row seats are rarely occupied, and if they are, it’s a short stint for in-city trips. The 2012 Montero Sport also finally gets rear wheel disc brakes that offer better, more consistent and more fade-free performance, whereas previous models made do with drum brakes. Magnesium paddle shifters, a feature previously only available on the top-model GTV 4×4 variants, as well as a new high-contrast instrument cluster with chrome ring accents, round out the small but useful improvements of the 2012 Montero Sport.

Hearing consumer reports, many people say that the Montero Sport is impressive indeed, but could still use some more improvements, chief of which is the heavy steering feel. Other people claim that it is just too heavy, especially when compared to its key rivals from Toyota, Hyundai and Isuzu. A lighter steering effort could perhaps see more sales. The brakes, however, are amazing. I have personally witnessed repeated stops from 160 kph on Clark International Speedway with a full load of passengers, the Montero Sport driven by Masaki Hirosaka, Mitsubishi Ralli-Art’s factory rally driver for the Paris-Dakar rallies and himself a multiple Dakar Rally Champion. Credit also goes to the OEM all-terrain Bridgestone tires measuring a meaty 265/65R17 and the firm, road-biased suspension. Other comments from owners include requests that the seating position could have been made better, the steering wheel higher, and with more anti-submarining tilt built into the driver’s seat.

And with the rainy season now more or less in effect in our country, everyone gets reminded of how useful a full-sized diesel SUV will be in our flood-stricken roads. The Montero Sport has impressive flood-fording abilities, and while not as capable off-road trailing as some of its competitors, it excels in loose surfaces like your typical provincial dirt and farm-to-market roads, the type of off-roading most average Filipino motorists will ever see and use their cars for. A limited slip differential is also standard on certain models, giving the Montero Sport more traction and stability on less than ideal surfaces.

New competitors are expected to arrive in the coming months, such as Chevrolet’s anticipated Trailblazer, a new Everest or similar SUV from Ford, and the all-new 2013 Hyundai Santa Fe. While the Montero Sport won’t be the newest or freshest competitor in this market, it will remain to be the best-priced and best-specified SUV in this market for years to come.