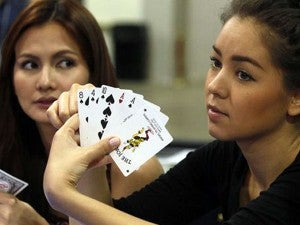 Attendants learn poker at Gaming Expo Asia in Macau Tuesday, May 22, 2012. The Global Gaming Expo Asia held between May 22-24 is a trade show and conference for the Asian gaming market. AP PHOTO/KIN CHEUNG

HONG KONG—As billions of dollars pour into Asia’s gleaming casinos, they are becoming the front line of a sometimes hugely lucrative battle between cheats and the house, say experts.

Both sides look to employ the latest, most advanced technology, but security consultant Sal Piacente says a scam in the Philippines last year took the gaming security world by surprise.

An Asian syndicate used an improvised camera hidden up a member’s sleeve to film the sequence of cards in a deck as it was cut on a baccarat table in Parañaque City last May.

The order of the cards was relayed digitally to another gang member who, after analyzing the footage in slow-motion, returned to the table as the deck finally came into play hours later.

Piacente, a 47-year-old from Brooklyn, said the multimillion-dollar “cutter scam” showed that as long as Asian casinos were the most lucrative in the world, they would attract the most skilful cheats.

“The scams that happen here (in Asia) are a lot more sophisticated than in the States,” he told AFP at the Global Gaming Expo Asia in Macau, a southern Chinese city that generates five times the annual gambling revenue of Las Vegas.

“What was happening here in Macau five years ago, is happening in the States now.”

Asia is in the midst of a casino building boom, fuelled by wealthy VIP gamblers from mainland China, with billions of dollars being invested in huge integrated casino resorts from Macau to Manila Bay and Singapore.

The new properties bristle with cutting-edge surveillance technology, but the cheats are coming up with their own high-tech innovations, such as the sleeve-camera used in the Philippines.

“If you go to a place like this in Macau, where the surveillance is a lot better trained, then the cheats have to be more sophisticated,” Piacente said on the expo floor at the glittering Venetian Macau resort.

Most of the exhibitors at Asia’s largest casino expo, which was ending Thursday, showed off the latest slot machines or video gambling innovations, but Piacente’s booth consisted of himself, a baccarat table and a bag of tricks.

Loaded dice, split chips and reflective gold rings are some of the more traditional tools of the cheater’s trade, which Piacente, president of UniverSal Game Protection, demonstrates with a magician’s flare.

He is also a master of sleight of hand – false shuffles, second deals, card palming –and can memorize a deck of cards instantly from sight.

He has worked a lifetime to perfect his skills, but tells his clients in the gaming world that the real cheats will be smarter, faster and better – especially in Asia where so much more money is at stake.

It is a constant battle.

“We do probably have one of the most advanced systems,” he said. “Technology helps you to be more efficient… and with the huge traffic (of casino gamblers in Macau) you really need that assistance,” he said.

Nevada casinos, in contrast, were hit hard by the 2008 financial crisis and are struggling to keep up with surveillance technology, experts said.

“Asia has been digital almost since day one because everything is new.”

Avigilon has partnered with South African company Cheeteye, which offers casinos software that scours data from multiple sources to identify suspicious behavior patterns, such as increases in a certain player’s average wager.

Cheeteye representative Graeme Powell said the company’s revenues had doubled in the past two years as casino managers, particularly “young, tech-savvy” ones, adopted the system.

As for the Parañaque City cutter scam, several suspects have been arrested while the alleged ringleader, Singaporean lawyer Loo Choon Beng, was reportedly found dead in a Chinese hotel room in August last year.

Ellen Adarna to fan with cheating partner: ‘You deserve what you tolerate’