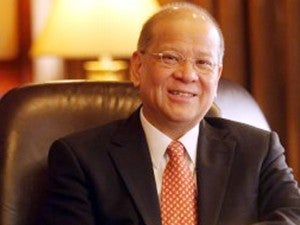 “Like buying a headache” is one of the most common descriptions used to describe San Miguel Corp.’s recent acquisition of a 49-percent stake, along with management control, in Philippine Airlines.

“Why would anyone want to buy PAL?” is the other question commonly asked by observers incredulous over the diversified conglomerate’s $500-million buy-in of the flag carrier.

But SMC president Ramon Ang—a tycoon as well as a certified pilot—has some unorthodox ideas about how to turn around the airline. For him, the prospects for PAL is “CAVU”—aeronautic jargon for “ceiling and visibility unlimited,” meaning ideal flying conditions.

“PAL is a good company with an excellent brand,” he said in an interview with the Inquirer—the first in-depth look he granted to the press about his rationale for acquiring a legacy carrier that has steadily lost market share in recent years to more nimble budget airlines.

“Despite so many problems over the last 20 years, the company has always been above water,” Ang said. “At the very least, it has been breaking even on average, and has been making money here and there.”

“It makes money a few years, and it loses money on some, despite all its labor problems,” said Ang, who is also an engineer known for getting into the operational nitty gritty of companies he acquires.

“That’s so easy to fix,” Ang said in Filipino.

PAL may probably be the most challenging among all of San Miguel’s acquisitions in recent years. Not only is the airline hobbled by high operating costs—being overstaffed and saddled with a militant labor union, among others—it also operates using an expensive “legacy carrier” business model at a time when airlines’ margins are being squeezed by rising fuel prices and dropping fares brought on by cutthroat competition.

But Ang, with his trademark bravado, said he was no stranger to difficult corporate situations, having recently completed a dramatic turnaround in the prospects of the country’s largest fuel refiner and distributor, Petron Corp.

“When we bought Petron, everybody said we were crazy … because the company was on the brink of collapse,” he said in Filipino. “At that time, Petron’s product did not conform to Euro 4 and Euro 5 emission standards, it was facing a 40-percent decline in market share, plus stiff competition from new players, some of which were not paying the correct taxes.”

Ang also recalled the skepticism that met SMC’s acquisition of Petron, since the conglomerate had no previous experience in the petroleum business.

“But I just brought in one finance man, an engineer from a glass plant, the sales manager of our food business, then I told Eric [Recto] who is a finance guy to remain in place [as Petron president],” he said. “Just four people. See where Petron is now.”

And PAL is no different, he said, adding with a chuckle: “But maybe you have to allow me to bring in six people, instead of four. Six new people and you will see that company run as fast as a racehorse.”

At the top of Ang’s to-do list for PAL is the restructuring of its flight operations alongside that of its sister firm Air Philippines, which SMC also bought into.

In particular, PAL’s new boss wants Air Philippines to take over all domestic and short-haul international routes using the low-cost carrier model, to allow the airline to compete directly with the likes of Cebu Pacific and Zest Air, the former in particular, having eaten significantly into PAL’s market share over the last decade.

With Air Philippines taking over the short-haul routes, PAL will concentrate on long-haul routes like regional flights of greater than three hours’ duration, where passengers are more willing to pay a premium for service and comfort.

Along with this, Ang unveiled plans to acquire up to 100 new aircraft for both PAL and Air Philippines over the next half decade, as well as for SMC to invest in a new international airport that will have up to four runways and can accommodate up to 100 million passengers annually on a 4,000-hectare site.

“This is one of the proposals we will put forward to the government,” he said, adding that the proposed airport would be closer to Metro Manila than Clark, and will only be “five to 10 minutes’ drive from EDSA.”

This statement has led to speculation that the site will be somewhere in Bulacan, immediately north of Manila.

The SMC chief also committed the resources of PAL to help the government in its effort to regain Category 1 status for the country from the US Federal Aviation Administration, since this is crucial for the airline’s profitability and eventual expansion.

As such, Ang’s plans inevitably invite the question of how the conglomerate would fund them all.

“Not a problem,” he said. “As of today, PAL is already healthy, financially, since we put $500 million in. Another $500 million will come in the near future.”