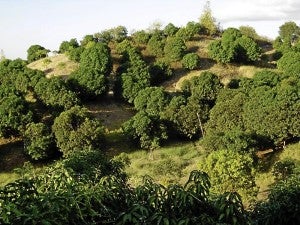 LAOAG CITY—Back in the day when it was fashionable for Ilocanos to become seamen, Ricardo Tolentino was sure he would be one of them after he earned his degree in marine transportation.

But fate had something else brewing for him.

After graduating from college, he worked for his uncle’s die cutting business in Metro Manila hoping to save up for his future. It was there where he met a mango exporter who helped him shape his path into becoming Ilocos Norte’s “Mango King.”

Tolentino relates that Robin Tan, who runs an export business, arrived in his uncle’s shop one day to order boxes for his mango exports.

“I saw a sample of his box with the words ‘Mango Export’ stamped on them. I felt the urge to ask him about it because I had a background in mango growing while I was still helping my other uncle’s mango farm in Ilocos,” he says.

He told Tan about this uncle’s mango farm and asked the exporter how the latter could help them expand the business.

“Tan became interested in exploring the mango business in Ilocos because he was in need of more products for export,” he says.

He says the exporter wanted to introduce mango spraying to farmers using chemicals such as potassium nitrate to induce the trees to produce more flowers uniformly in contrast with the traditional “smoking” technique.

Back then, Tolentino’s uncle was marketing his products around Ilocos and in Cagayan Valley. They wanted to produce more but didn’t have the market. 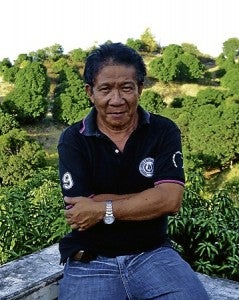 Tolentino says it was worth the shot to return to Ilocos and start mango farming.

Armed with P50,000 worth of farm inputs loaned by Tan, he returned to Ilocos and started encouraging farmers to switch to mango spraying. He served as Tan’s associate in his export business.

“Then things began to shape up for the Ilocos mango industry. Farmers began to realize more income because of the market that Tan provided,” he says.

Tan later provided more capital to farmers so they could grow more fruits and meet the demand of the export market.

Tolentino later started his own export business and was able to put up at least nine mango plantations, earning him the title “Mango King” of Ilocos Norte.

He sends his green mangoes (carabao or native type) to Hong Kong and Japan, while those which did not pass quality control are bought by mango processors who convert the fruit to mango juice or dried mango.

“Agriculture is the biggest employer in the Philippines. Mango is like a staple food. A food business will never go down. It always has big potential,” he says.

Tolentino’s unsolicited advice for new businessman is to invest in agriculture.

“There are low-risk businesses but the income is minimal as well. Then there are high-risk businesses like mango production and export. If you go past the risk, you can expect big money,” he says.

“You just have to be bullish. Starting a mango business is like a game of chance, you need to gamble,” he adds.

Tolentino says he had his share of frustrations, like in any other business venture. He lost money for five succeeding years but his other businesses helped him out of the slump.

He is also a softdrink distributor and owns a trucking business and a junk shop. 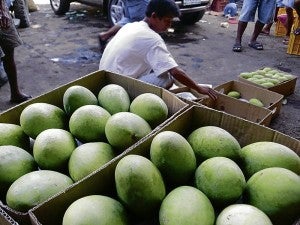 ANOTHER mango farm run by Ricardo Tolentino in Barit, Laoag City is set to be given a Good Agricultural Practices certification by the Department of Agriculture for promoting non-toxic technology in growing mangoes. Photo By Cristina Arzadon, Inquirer Northern Luzon

“Agriculture has big potential. I also have a vegetable farm and now supply our family’s and workers’ daily consumption amounting to P3,000,” he says.

He advises land owners to convert their idle land into vegetable farms, noting the high demand for vegetables down to the village level. “We still have to get our vegetables from Baguio when we can grow our own,” he says.

He also considers a good sense of timing of market trends as helpful to any new businessman.

He cites the case of the onion and garlic industry where there have been notable up and down curves in the market.

“Many farmers planted big volumes of garlic and onion this year hoping that they will still take advantage of the high prices last year. But since many farmers thought the same way, there is now a huge supply of onion and garlic in the market, resulting in low prices. It is the law on supply and demand,” says Tolentino, the newly elected president of the Philippine Chamber of Commerce and Industry in Ilocos Norte.