Before buying anything, read this first 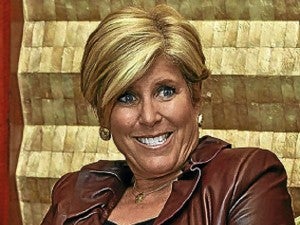 She chooses to live in a New York apartment that can fit in her friend Oprah’s bathroom, even if she could afford to buy a penthouse residence. She wears the same set of earrings and holds on to the same purse for decades until it’s worn out and beyond repair. If she sees a penny on the road, she will stop and bend over to pick it up because she believes every penny must be respected.

That’s American personal finance guru Suze Orman—a woman who emancipated herself out of poverty and made a career out of helping others do the same—practicing what she preaches. This multiawarded television host, motivational speaker and best-seller author who was once described by USA Today as a “one-woman financial advice powerhouse, Orman was in town last week to fulfill a promise made for the last five years to her friend Doris Magsaysay Ho, chair of Asia Society Philippines, to help inspire Filipinos in their quest for financial freedom.

While Orman herself chooses to adopt a lifestyle that’s much more Spartan than her means, many other people in the world do the opposite and she gained fame, fortune and influence for her advocacy to help people who are  caught in the debt trap. The host of the award-winning Suze Orman Show which airs every Saturday night on CNBC earns around $190,000 on speaking engagements in the United States but she agreed to speak before Filipinos for free and expressed interest to come back and help draft financial literacy programs for the country pro bono.

In a speech before employees of Ayala-led Bank of the Philippine Islands which backed her visit to Manila, Orman says the Philippines would soon shine in the global arena. She says, however, that Filipino consumers must avoid going the way of the United States, which has allowed its economy to grow on credit, lending to people who could not afford homes, driving more people “on a highway to poverty.”

“Build this country on cash so that it could never collapse, then you can change your lives,” says Orman, who was raised in an unruly Chicago neighborhood and who used to wait on tables before transcending poverty as a securities broker at American investment house Merrill Lynch.

“You’re going to be taken note of in other countries, see investment money come and you’ll see that the time for the Philippines has just about arrived. The question is, will you be able to hold on to the gifts that are about to come your way?” she says.

The American personal finance guru spoke strongly against incurring debt to purchase non-essential things, noting she had watched her own country fall apart because of this.

She said consumers must distinguish between good and bad debt, good debt being amortizing to one day own a home.  On the other hand, she said that credit card debt was “very bad debt.”

“If you have credit card debt, what that says about you is that you are buying things that you can’t afford,” she says, urging banks to issue credit cards only to those who can responsibly use credit.  Ideally, she says credit card users should use their card all they want but pay everything when the bill arrives.

In the US, she says it was a common mistake for banks to even increase the credit limit when somebody had maxed out his ceiling and only paying the minimum due.

The best way to help these people would be to stop charging interest and as the borrowers pay off, reduce their credit limit.

For overseas Filipinos, Orman says her advice would be to consider whether sending money to adult brothers or relatives would only be encouraging dependence. “Is it possible that it’s hurting them rather than helping them?” she says, adding that some people may not reach their potential or may not be driven into making contingency plans because they have remittances to fall back on.

But she stresses that for parents, it’s a whole different light, as she herself would want to take care of her mother. Orman herself has Filipino helpers in the US and also taps Filipino call center agents in Manila to service her own voice call outsourcing needs.

For young people, she says they should realize that their best commodity is time and that by starting to regularly save a portion of their earnings regularly, they will accumulate more wealth with the help of compounding, which means earnings from an initial investment are reinvested over and over.

On insurance, she says it’s a must for young people who have dependents—spouses or young children—and who have yet to build enough wealth that these dependents could live on if something happens to them. But she says the only type of insurance that would make sense would be term insurance with tenor approximating the time that one’s dependent would have reached adulthood.

Before becoming a prominent personal finance expert and inspirational speaker, Orman used to earn $400 a month as a waitress and at one point in time, slept in her car because she could not pay the rent.  She waited on table for seven years until the age of 30, when she dreamt of opening her own restaurant.  She asked her mother for $20,000 to open her restaurant but her mother was unable to help her.  One of her regular customers took a pity on Orman and pooled $50,000 from other customers to lend to her for 10 years without interest.  She brought the money to Merrill Lynch but the attending broker convinced the then naive Orman to speculate in the stock market. She says she was made to sign papers to make it appear that she was a sophisticated investor who was qualified to invest in stock options. Within three months, she lost all the money.

“If I hadn’t lost that money, I won’t be standing here today. Nothing ever goes wrong, everything happens for the best,” she says.

Realizing she still owed $50,000 to her customers, she thought of getting a job as a broker at Merrill, which at that time never hired female brokers.  She was hired but with a caveat that she would be fired in six months.

One Merrill Lynch executive took a liking at Orman and advised her to sue Merrill Lynch for the bad handling of her $50,000 investment even when she was still an employee. This she did and because of the ongoing case, Merrill Lynch could not fire her. As the case dragged on, she had become one of Merrill Lynch’s top producers and realizing that the firm was earning more money than Orman’s $50,000-suit, the brokerage gave back her money plus interest.  This in turn allowed Orman to pay back her kind-hearted friends.

Orman says this only showed that any wealth that she had made was something she had worked for.  Even as she has gone a long way since then, Orman is not fond of splurging on jewelry or clothes.  She had to change her purse recently, after 15 years, only because it was beyond repair.

Jewelry, for her, is a “horrible” investment. Orman says that if you purchase jewelry and try to sell it when you need to cash in, you usually end up selling lower than your original buying price. But for her, investment in gold as a commodity, is “fabulous” and noted that gold is part of her personal portfolio.

On real estate, Orman says she had homes in different parts of the world but does not consider them as investments because they were for her own use.  She did not care whether their values go up or down.  On taking out equity in a home to buy another home, she says this was a no-no unless the owner had money backed up somewhere.

“Every single person in this world has the ability to be more and have more and it’s the choices that we make about ourselves that become our net worth,” she says.