Rise and fall of PX trade 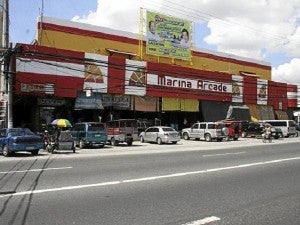 MABALACAT, Pampanga—What used to be a popular destination for its wide array of PX goods, this town’s biggest village and commercial district now showcases only mostly China-made products and goods that can also be found elsewhere.

The several dozens of stalls near the service road of the North Luzon Expressway (NLEx) in Barangay Dau used to be well known for the “Made in the USA” merchandise they sold -– from Hanes and Fruit of the Loom shirts and Levi’s denim pants to Piknik shoestring potatoes and Washington apples — that were not readily available in shopping centers and supermarkets.

In his book, “Views from the Pampang,” Alex Castro, who also wrote history and culture-related articles for a daily newspaper here, said that in the 1970s and 1980s, people from other parts of the country recognized Dau more than this town itself.

“PX goods flowed out of the base (Clark Air Base) in abundance, to be resold later in stores and shops that quickly sprouted like mushrooms along MacArthur Highway. Farmlands were flattened and idle lots were cleared to give way to hole-in-the-wall stalls that sold never-before-tasted goodies and luxuries seen only on American glossies,” Castro says.

“All of a sudden, Pringles in canisters, Hanes T-shirts, Pacex Milk and ice cream, Dove soap [bars] and Piknik shoestring potatoes were all the rage. Everybody joined the PX bandwagon and soon, a commercial area of sorts rose in Dau, the biggest of which is the Marina Arcade owned by the Moraleses. 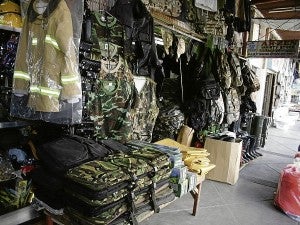 Most of the customers of the PX stores were Metro Manila residents who drove through NLEx to this town to buy American-made products.

Because of the abundant PX goods, Dau also became a regular pit stop for motorists and travelers going to and coming from Baguio City.

“We got our PX products from many sources, including dependents (Filipino women married to American servicemen stationed at Clark Air Base) who sold them to us and we resold to our customers, particularly those from Manila. Among the items being regularly bought from us were soda in cans because you could not find them in local grocery stores at that time,” says Efren Torres, 46, who worked at a stall at Dau Mart II in the early 80s.

But the unexpected withdrawal of American forces from Clark after the eruption of Mt. Pinatubo in 1991 and the non-ratification by the Senate of the proposed extension of the Philippines-United States Military Bases Agreement served as a sledge hammer that shattered Dau’s lively PX trading. 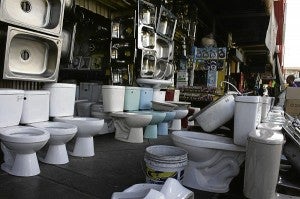 FIXTURES for bathrooms can also be bought from one of the stalls at Marina Arcade. Photo by Jun Malig, Inquirer Central Luzon

The US servicemen and their families abandoned Clark via the Subic Naval Base in nearby Zambales. The exodus became a point of no return for the Americans after the Senate voted to reject the extension of the agreement that would have allowed American forces to continue occupying its military bases in the country.

The flow of PX goods to Dau stalls was stopped. However, it was soon replaced by fixtures from abandoned buildings and houses and household appliances, gears and other items left by the Americans at Clark.

Anything that was looted from the former US military base somehow found their way to the PX stalls and junk shops here and in nearby Angeles City.

“At the height of the Pinatubo eruption, even whole doors, hospital beds, architectural pieces and medical apparatus found their way into Dau shops,” Castro says.

The liberal international trade adopted by the government after the 1986 Edsa Revolt also affected the PX trade in Dau. Filipinos no longer had to go to Dau to buy Washington apples, Sunkist oranges and US-made shirts and jeans, as these could already be bought from public markets and shopping malls. 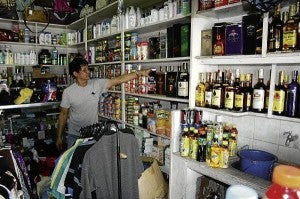 A STALL owner arranges containers of imported lotion, alcoholic beverages and juice that can also be bought from nearby supermarkets and duty-free shops at the Clark Freeport. Photo by Jun Malig, Inquirer Central Luzon

The succeeding years saw the establishment of several duty-free stores in Clark that offered various imported items, including goods that used to be sold only by the PX stalls in Dau.

PX store owners, along with local supermarket owners and other businessmen, staged protest rallies against duty-free stores. Cases were also filed against them in court.

But until now, duty-free stores continue to operate at the Clark and Subic freeports.

Since the late 90s, the stalls at Marina Arcade, Dau Plaza and Dau Marts here only sell products like outdoor gears and equipment, generator sets, bathroom fixtures, tools and other products that can also be found in local malls and department stores, hardware stores and specialty shops.

Many of the patrons of Dau stalls these days are Filipino soldiers stationed at the Air Force City in Clark and Camp Aquino in Tarlac City and airsoft enthusiasts who buy camouflage and fatigue shirts and military accessories.

A stall owner says they also offer goods from balikbayans, who bring with them boxes of assorted used and new items each time they spend their vacation in the Philippines.

“Balikbayans buy from garage sales and [buy goods at] discounted prices from Walmart in the States. They put these in boxes and sell the contents to us. We sell them at slightly higher prices to our customers. This way, they can also recover their vacation expenses,” the stall owner says.

Castro says if martial law, anti-American government demonstrations and fires that razed the commercial strip a couple of times in the past did not dampen the tempo of business in Dau, Mt. Pinatubo’s eruption and the subsequent political and economic developments also failed to stop the enterprising spirit of some stall owners.

“Dau’s golden PX age may have gone, but with the unwavering spirit of enterprise demonstrated by its hardworking people, the barangay continues to forge to the future, firmly entrenched as Mabalacat’s premier and undisputed commercial center,” he says.