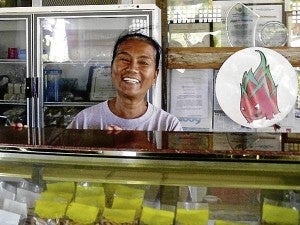 ILOCANDIA’S Dragon Lady Edita Dacuycuy is behind a successful fruit farm that has become a show window for the first dragon fruit plantation in the Ilocos Region. Photo by Cristina Arzadon, Inquirer Northern Luzon

BURGOS, Ilocos Norte—Don’t go looking for a round-shaped fruit covered with red overlapping scales when you hunt for that money produce this time of the year here. Chances are, you won’t find one.

The oddity of the dragon fruit, locally known as saniata (light), is not just in its form. In Burgos, where the fruit became a testament to wealth, Ilocandia’s “red gold” is set on cactus-like trees plotted on farm beds that sit beside corn, rice, garlic and other common Ilocano cash crops.

The plots leading to the Ilocos region’s first dragon fruit plantation are owned by locals who have started their own fruit farms following the success of the town’s most outstanding farmer by far.

But Edita Dacuycuy, now known as the “Dragon Lady,” could only manage to share a fruit each to her Chinese friends who came looking for the fruit believed to bring fortune in the Year of the Dragon.

The trees are still in their growing period, having been planted only in December. It takes eight to 10 months or until October for the trees to mature. They begin to flower around May and bloom only at night, earning the name moon flower or “Queen of the Night.”

While her neighbors were planting cash crops, Dacuycuy started cultivating a backyard garden with the then lesser-known dragon fruit in 2005. Her daughter, Mildred, says Dacuycuy would spend hours under the sun supervising her farm.

“I didn’t want my neighbors to know what I was doing until I was sure I could grow the dragon fruit,” Dacuycuy says.

She was introduced to the fruit by a friend who knew of her difficulty in finding ways to relieve her daughter Kate’s constipation problems, a condition that is common to patients with cerebral palsy.

Dacuycuy found the fruit effective on her daughter and decided to cultivate it herself upon learning how much it costs.

“The fruit looked so unfamiliar. I saw it once from a store in Metro Manila and found that it costs P450 a kilogram. That’s the equivalent of a sack of rice,” she says. 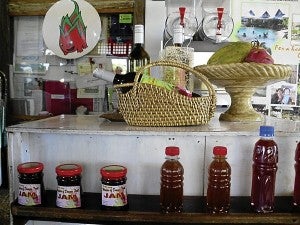 “But when I learned of the fruit’s health benefits, I just took the leap,” Dacuycuy, who used to be a division manager of an insurance firm, adds.

She found more information about the fruit by surfing the Internet, a task she assigned to her daughter Mildred.

Sensing its business potential, Dacuycuy took a step farther. She sent Mildred to Thailand, where the fruit is common, to learn how the family could propagate more.

From backyard planting, Dacuycuy could no longer stop growing more. She developed a fruit farm on her property and later ventured into business.

“We didn’t notice we were already expanding. The business came spontaneously,” she says.

From a small plot, the fruit farm now stands on a 10-hectare property, which Dacuycuy supervises. She and her husband built a house and developed other dragon fruit-based recipes and products—pastries, jam, wine and soap.

The family’s steady market includes traders from neighboring provinces and Metro Manila; Dole Philippines, which orders the fruit in bulk; and hotels in Ilocos Norte.

Dacuycuy also built a resort facility and offers accommodation with the dragon fruit as an attraction.

Mildred, who helps run the business, says her family decided to build home-stay facilities for visitors who wish to watch how the dragon trees bloom at night.

“The flowers almost glow in the dark and they produce an aromatic scent that spreads around the farm,” she notes. 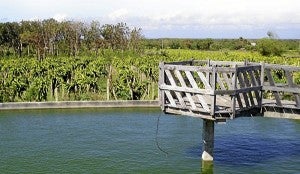 Dacuycuy organized a group of dragon fruit growers in the province, known as the Kailukuan Saniata Cooperative. As part of her community work, she provides saplings for their farms and gives lectures and demonstrations on fruit growing.

“I even give saplings for free to neighbors who wish to grow fruits for their household consumption,” she says.

A separate plot in Dacuycuy’s farm has been reserved for the dragon tree plantation of the Ilocos Agriculture and Resources Research and Development Consortium for its research work.

“I share everything with my community, from employment to livelihood. For as long as you have delivered the mission, the commission will follow … this is my advocacy,” she adds.

For her community work and growing business venture, Dacuycuy was first recognized as a Magsasaka Siyentista in the Philippine Council for Agriculture, Aquatic and Natural Resources Research and Development’s science and technology-based farm project in 2008.

She was also a National Gawad Saka awardee in 2010 and outstanding farmer-innovator by government and nongovernment institutions.

The latest addition to her trophy collection was an award she received as female innovator in the Asia-Pacific Economic Cooperation (Apec) summit in San Francisco, California, in September last year as the Philippines’ sole representative.