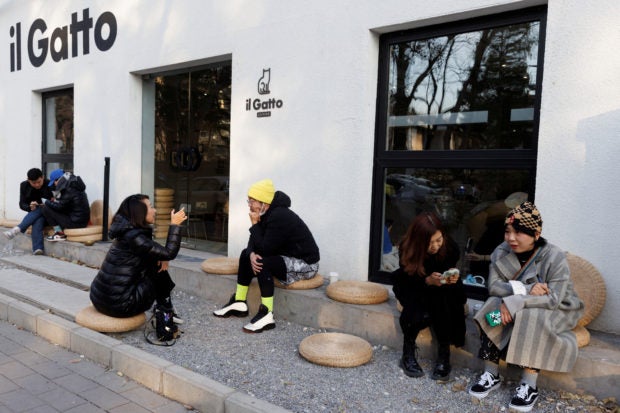 People sit outside a cafe after some curbs were lifted as coronavirus disease (COVID-19) outbreaks continue in Beijing, Dec 7, 2022. REUTERS/Thomas Peter

BEIJING/NEW YORK – China’s shift from tough COVID policies, with its promise of driving an economic recovery next year, will instead likely depress growth over the next few months as infections surge, bringing a rebound only later in the year, economists said.

There are already signs of revived demand for travel and other services, but China’s fragile healthcare system and low vaccination rates have left it ill-prepared for a big wave of infections, which could spark labour shortages and make wary consumers even more skittish.

Some economists have lowered growth forecasts for early next year for the world’s second-largest economy, continuing the grim growth numbers this year that were among the worst of the past half-century.

And while longer-term confidence about the recovery remains unshaken, a reopening of the economy could also trigger inflation, which has so far remained relatively tame in China despite surging prices in other major economies.

“Compared with other developed countries, medical resources in China are somewhat insufficient,” said Nie Wen, a Shanghai-based economist at Hwabao Trust, who has cut his China growth forecast for the first quarter to 3.5 percent-4 percent from 5 percent previously.

He cited a particular risk of COVID outbreaks when China celebrates the Lunar New Year holiday in January, a popular time for travel among the country’s 1.4 billion people.

China’s economy grew just 3 percent in the first three quarters of this year, but an annual meeting next week of top policymakers is expected to aim higher: government advisers told Reuters last month they would recommend 2023 growth targets ranging from 4.5 percent to 5.5 percent, while a central bank adviser said last month that China should set a target no lower than 5 percent.

This year’s depressed growth, while due partly to a domestic property market slump and the global economic slowdown, has also been blamed widely on China’s harsh COVID-related restrictions.

With China likely facing waves of COVID infections after the relaxations, the benefits of reopening are expected to arrive with a significant delay.

“Given the accelerated reopening timeline, we believe growth may stay subpar near term,” Morgan Stanley said after the announcement of the latest easing measures.

The bank’s analysts expect growth to improve modestly but remain subpar in the spring, with “a more meaningful rebound” in the second half of the year and 5 percent growth for the full year.

HSBC said in a research note that it expected growth above 5 percent in 2023, citing the relaxed anti-COVID measures and supportive fiscal and monetary policies.

Economists and analysts were confident that, overall, the reopening was more positive for growth.

Lurking among the prospects for China’s reopening, however, is a potential surge in inflation, which could hit the global economy as well as China itself.

“The potential reopening could bring inflationary challenges to China, with a surge in demand, especially the accelerating household consumption, and short-term disruption to labour supply, production and supply chains amid an inevitable exit wave of new cases,” said Bruce Pang, chief economist at Jones Lang Lasalle.

A report by Eastspring Investments warned that this could have implications as well for the inflation battle by the U.S. Federal Reserve and other major central banks.

“A disorderly reopening and a rise in inflation as the economy rebounds would be key risks for China,” it said.

“Meanwhile, high energy prices which have been another inflation driver will likely face more upward pressure especially as China begins to reopen, and this could prolong central banks’ battle against inflation.”

Your subscription could not be saved. Please try again.
Your subscription has been successful.
Read Next
‘The worst is yet to come’: the curse of high inflation
EDITORS' PICK
PH, US to restart joint patrols in South China Sea
Marcos admin OKs 1st PPP project: P6-B UP-PGH Cancer Center
PH salaries to rise 4%, says survey
Omega Speedmaster super racing: Tiny device massive change
vivo Philippines offers a free bouquet of flowers and a premium necklace perfect for Valentine’s Day
House energy committee chair Arroyo bats for cheap electricity
MOST READ
Vice Ganda gets called out for ‘unfair treatment’ of ‘It’s Showtime’ co-host Karylle
Fuel price rollback expected on Feb 7
Kris Aquino gets ‘renewed confidence’ after consultation with new doctor: ‘I have a strong chance of getting better’
Immigration detention head, 35 others sacked over foreign detainees’ VIP treatment
Don't miss out on the latest news and information.