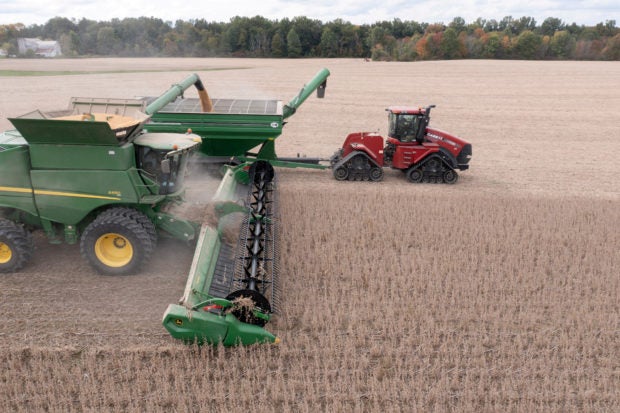 A combine harvester is seen as it harvests soybeans while loading a grain transfer hoper in Deerfield, Ohio, U.S., October 7, 2021. Picture taken with a drone. REUTERS/Dane Rhys/File photo

CHICAGO – Soaring grain and livestock prices are expected to push U.S. farm incomes to a historic high this year, as producers benefit from strong global grain and oilseed demand amid tight supplies, the U.S. Department of Agriculture reported on Thursday.

Net farm income – which is a broad measure of profits in the agricultural economy, according to the agency – is forecast to increase to $160.5 billion in 2022 from $141.0 billion a year earlier, an increase of $19.5 billion.

Much of the growth in the crop sector came from sales of corn, soybeans and wheat, the agency said, noting that livestock cash sales receipts were also expected to jump nearly 31 percent to $256.0 billion.

Net cash income is recorded in the year a commodity such as corn, soybeans or pork is sold. Net farm income is for the year it was produced, and factors in such things as depreciation of assets, including farm equipment.

Production costs are up sharply, too, the agency reported. Nearly all categories of expenses are forecast to be higher in 2022 in nominal terms, the agency said, with feed and fertilizer, lime and other soil-related input purchases expected to see the largest dollar increases.

Fuel and oil expenses are forecast to see the highest percentage increase – up 47.4 percent to $20.5 billion – followed closely by interest expenses, up 41 percent to $27.4 billion.

Farm debt in nominal terms is forecast to increase 5.9 percent this year over last – but fall 0.4% when adjusted for inflation.