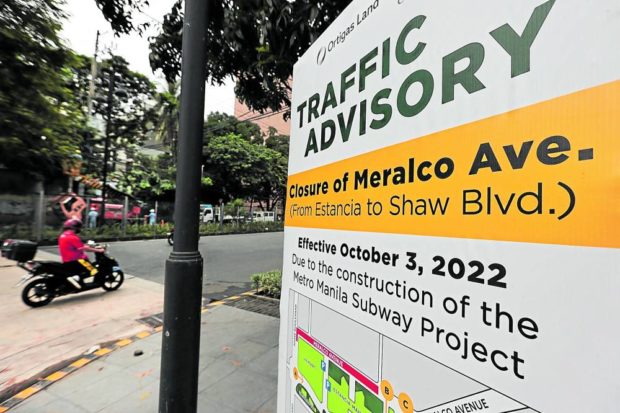 A traffic advisory in front of Estancia Mall in Pasig City announces the partial closure of Meralco Avenue to give way to the construction of the metro subway. A stretch of road from Capitol Commons to Shaw Boulevard will not be passable until 2028. —GRIG C. MONTEGRANDE

The construction arm of DMCI Holdings Inc. wants to take a bigger part in realizing the Metro Manila Subway project, an infrastructure undertaking aimed at improving public transportation in a region with high population density.

“There [are] still three more sections that we’re bidding [for],” he said. Consunji said they were just waiting for the government to open the bidding, which would likely start in January next year.

The DMCI official declined to disclose which packages they were looking at due to a nondisclosure agreement.

Transportation Undersecretary for Railways Cesar Chavez told the Inquirer previously that contract packages 105 (Kalayaan and Bonifacio Global City stations), 108 (Lawton and Senate-Department of Education stations) and 109 (Ninoy Aquino International Airport Terminal 3 station) were targeted to be awarded within the second and third quarters of next year.

DMCI won the P21-billion contract package 102 back in October together with its partner Nishimatsu Construction Co. Ltd. The subway portion involves the construction of Quezon Avenue and East Avenue underground stations and tunnel works.

“We are very excited to be part of this historic project. Once completed, the subway will help address urban mobility issues in our nation’s capital,” Consunji said earlier.

The actual civil works were targeted to begin by May or June next year and could take four to five years to finish, he said.

“They’re still clearing the area, the right-of-way, which is good,” Consunji said.

A portion of Meralco Avenue in Ortigas, Pasig City, will be closed until 2028 to make way for the civil works.

The subway, designed to have 17 stations, will connect Valenzuela City to Pasay City. It is expected to service over 519,000 passengers daily once operational. INQ