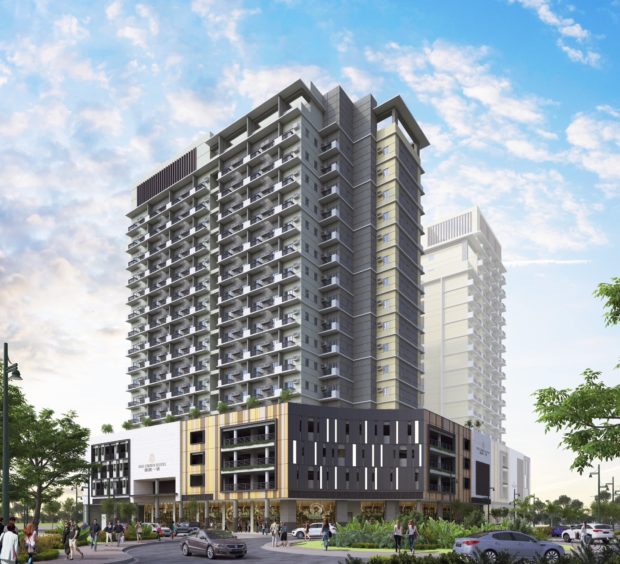 An artist’s perspective of the planned One Crown Suites in Winford Resort, Manila. Contributed photo

Billionaire Andrew Tan is expanding his casino empire through a P15-billion gaming and commercial township project at the former site of the San Lazaro racetrack in Manila City.

Tan-led Megaworld Corp. announced plans on Monday to build an Old Manila-themed estate to be called Winford Resort on a three-hectare land in the San Lazaro Tourism and Business Park.

The Winford Resort will feature “residential condominiums, hotels, and commercial developments with a casino complex”, the builder said in a statement.

According to Megaworld, the Winford Resort will be inspired by “pre-war” Manila with its buildings to be designed using French Renaissance, Neo-Classical, and Art Deco architecture.

“This commitment to revive the old beauty of Manila will be apparent in the designs of the commercial developments of this community,” Wilson Sy, first vice president and head of sales and marketing at Megaworld’s Manila division.

“The beautiful architecture of the pre-war years will be seen in the Promenade, which is envisioned to become a major tourism destination in this side of Manila,” he added.

“Our new development is in a strategic location within the City of Manila. It is not only close to schools, but also to hospitals and public transport, such as the LRT,” Sy said.

Megaworld said it would launch the 17-story One Crown Suites residential project within the new township.

The project, which would generate sales of about P3 billion, will be completed in 2028.

“This new residential development is perfect for students as well as young professionals like doctors, nurses, and even teachers who study or work around the area. This location is a rising lifestyle district in the City of Manila,” Sy said.

Megaword remains bullish on expansion amid strong revenue growth in the first nine months of the year.

It said in a recent stock exchange filing that total revenues were up 15 percent to P42.5 billion during the period as core business segments expanded.

Megaworld hotels and resorts saw revenues increase by 38 percent to P1.8 billion as pandemic restrictions were eased earlier this year.